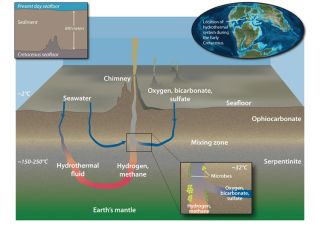 Scientist found mummified microbial life in rocks from a seafloor hydrothermal system that was active more than 100 million years ago during the Early Cretaceous, when the supercontinent Pangaea was breaking apart and the Atlantic Ocean was just about to open.
(Image: © Illustration by Jack Cook, Woods Hole Oceanographic Institution. Inset paleogeographic reconstruction by Ron Blakey, Colorado Plateau Geosystems)

Signs of 125-million-year-old life lurk in rocks drilled from deep under the seafloor near Spain and Portugal, new research finds.

The rocks date to a time when the Earth's mantle, the viscous layer just below the outer crust, was exposed to seawater. Scientists have long suspected that this mix of deep-Earth rocks and ocean water could have created conditions ripe for life. The new study, published today (Aug. 31) in the journal Proceedings of the National Academy of Sciences, reveals how those chemical reactions might have happened.

"All the ingredients necessary to drive these ecosystems were made entirely from scratch," study lead author Frieder Klein, a scientist at the Woods Hole Oceanographic Institution in Massachusetts, said in a statement. "Similar systems have likely existed throughout most of Earth's history to the present day, and possibly exist(ed) on other water-bearing rocky planetary bodies, such as Jupiter's moon Europa." [7 Theories on the Origin of Life]

Brewing up some life

The microbial traces discovered by Klein and his colleagues are far from the most ancient life on Earth; the first microbial life dates back to at least 3.5 billion years ago.

But the new study hints at how life could form from a nonliving chemical soup. The rocks were first drilled from 2,264 feet (690 meters) below the seafloor, in 1993.

The rocks represent the ancient seafloor, which was first thrust upward from the mantle during the breakup of the supercontinent Pangaea. The rift that opened the Atlantic Ocean exposed the rocks to seawater for the first time, according to the study. Chemical reactions between the rocks and the water infused the seawater with minerals. The result was a potent mix of hydrogen, methane, dissolved carbon and "electron acceptors," or chemicals capable of taking up an electron as cells respire, the researchers said. (Iron, oxygen and nitrate are examples of electron acceptors.)

Microbial life flourished in this stew, Klein and his team found. The rocks held organic-rich veins of lipids (fats), proteins and amino acids (the building blocks of proteins) — all chemical signatures of life.

Microbial colonies were living in fractures in the seafloor rock, feeding off the hydrothermal seawater created by the geological rifting process, Klein said. But minerals grew over the cracks, entombing the microbes within.

"The minerals proved to be the ultimate storage containers for these organisms, preserving their lipids and proteins for over 100 million years," Klein said.

The rocks had been stored at room temperature under nonsterile conditions, so Klein and his team had to penetrate into the drill cores to find untouched, uncontaminated samples.

When the researchers discovered lipids and other organic material, Klein called on the expertise of Florence Schubotz, a lipid expert, from the University of Bremen in Germany. Schubotz did a biochemical analysis of the lipids and discovered that they appear nearly identical to those found at the modern Lost City hydrothermal field, an active area of hydrothermal vents in the middle of the Atlantic Ocean.

"I was stoked when I saw Dr. Schubotz's email detailing the analytical results," Klein said. Such lipids had previously been found only at places where the conditions for life are challenging, he said. Those places include the alkaline vents at Lost City, or at cold seeps where methane and other hydrocarbons leak from the seafloor.

Klein and his team said they hope their findings contribute to a better understanding of how water plus rock can add up to life, even — potentially — on other planets. The researchers plan to search for similar microorganism signatures in other rocks where rifting of the same type may have happened, Klein said.

"In the future, we'll be trying to learn more about these particular microorganisms and what the environmental conditions were in the mixing zone," he said.