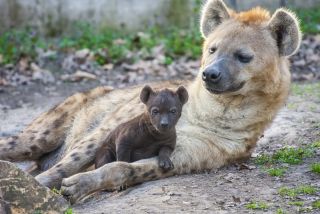 A spotted hyena mother with her cub.
(Image: © belizar / Shutterstock.com )

Spotted hyenas are some of the most recognizable and successful carnivores of sub-Saharan Africa. But this success belies a very real struggle each adult hyena must face — the socially and physically complicated world of hyena sex.

"They have a hundred things about them that make them unique," said Micaela Szykman Gunther, an ecologist at Humboldt State University in California whose research focuses on the reproductive behavior of social animals. "People have been very fascinated by them."

One of the most interesting things about spotted hyenas, Gunther told Live Science, is the complex social system that underlies their mating behaviors. [See Photos of Spotted Hyenas at With Their Kills]

Spotted hyenas live in hierarchical clans, which typically contain 40 to 80 individuals, though they may have fewer members depending on the habitat. Whatever the size of the group, however, individuals still know and regularly interact with all other clan members, Gunther said.

Females, being the larger and more aggressive sex, rule these clans. In fact, even the highest-ranking male sits below the lowest-ranking female. Females typically stay in the clan they're born into, while males leave their natal clans after puberty to find a new home.

However, being accepted into a new clan is no simple matter — established males see new males as competition. "They are very aggressive to new males," Gunther said. "In order to be accepted, [the new male] has to defer to every single other hyena in the clan."

A new male starts at the very bottom of a clan's hierarchy, but he — like all other immigrant males of the clan — still has an opportunity to mate.

It's not clear what exactly is involved in the sexual selection of spotted hyenas, but females do appear to prefer higher-ranking males. Since males can only gain in rank after a higher-ranking male dies (they do not fight for rank), females may use their social rank as a kind of index for persistence and fitness, Gunther said.

Mating among spotted hyenas doesn't coincide with specific seasons, as females have multiple estrous cycles throughout the year. During this time, males may determine the female's reproductive status by sniffing her urine.

The most common of these behaviors, Gunther said, is the approach-avoid display, in which the male will approach a female and repeatedly take a few steps toward her and then a few steps away, even if the female doesn't react to his approach.

"Males are very wary because females are very aggressive," Gunther said. "He has to overcome this fear of a dominant animal."

The approach-avoid display is often followed by a "present" gesture, wherein the skittish male shows his side to the female and allows her to sniff him.

A male may also bow his head while performing the foot cross and foreleg auto-groom.

If the female likes this performance, she will bow her head to the ground and keep her legs braced and apart — a sign of receptiveness that lets the male know she won't try to bite him.

The actual act of mating is even more difficult and awkward than the preceding courtship rituals, due to the female's unusual, malelike sexual anatomy.

Specifically, females have a long, penis-resembling clitoris — called a pseudopenis or a peniform clitoris — which they use to urinate, mate and give birth. (Interestingly, their labia are fused together and bulbous, resembling a scrotum).

To mate, a male must angle his penis up and backward to get it into the female's pseudopenis, which is angled forward — a feat that can only be accomplished with acquiescence from the female, making forced sex physically impossible. Copulation generally requires a series of short mounts from behind followed by one long (6 to 7 minutes) mount.

These short mounts, Gunther said, likely help the male determine if the female is still receptive and help the two get the right positioning.

After ejaculation, the male may rest his chin on the female's back for a few moments before dismounting. From there, the pair will go on their separate ways, possibly to mate with other adults in the clan.