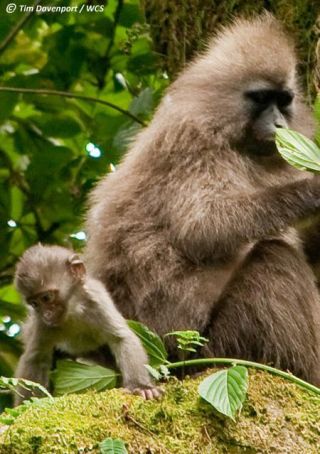 Viruses related to the human immunodeficiency virus (HIV) have infected Old World monkeys as far back as 16 million years ago, according to a new study. The research provides insight into how monkeys evolved and adapted to the simian version of HIV, and why some viruses can jump from one species to another, researchers say.

In the new study, researchers reconstructed the evolutionary history of a gene that produces a protein that protects mammals' cells from retroviruses — a group of viruses that includes HIV and its counterpart that affects monkeys, called simian immunodeficiency virus (SIV). Both HIV and SIV are lentiviruses, a subset of retroviruses. With lentiviruses, it takes a relatively long time between when a person or animal is exposed to the virus and when symptoms show up. For instance, it may take two to four weeks for people infected with HIV to show flu-like symptoms, according to the U.S. Department of Health.

"HIV in humans is actually the result of an SIV jumping from chimpanzees in Africa into humans, and then adapting to humans and spreading in the human population," said study co-author Welkin Johnson, a biology professor at Boston College. The close genetic relationship between humans and monkeys allowed the virus to jump between species, Johnson said. [10 Deadly Diseases That Hopped Across Species]

SIV doesn't affect monkeys the same way HIV affects humans, because "SIV has been in them so long that they sort of deal with it the way we deal with herpes virus," Johnson said. (Herpes simplex virus, or HSV, can result in oral herpes (HSV-1) or genital herpes (HSV-2). Although most humans have HSV, few people suffer symptoms because the virus is well-adapted to humans, Johnson said.)

The so-called TRIM5 gene evolved to protect a monkey's host cells from SIV by producing a protein that keeps the virus from multiplying. The human version of TRIM5, on the other hand, does not protect against HIV, according to the study.

The researchers created an evolutionary tree of the TRIM5 gene. Then, they analyzed and compared its complete protein-coding DNA sequence in 22 African primate species. They found a set of adaptive changes specific to the TRIM5 proteins in a subfamily of Old World monkeys called Cercopithecinae, which includes baboons, macaques and mangabeys. The changes in that group of monkeys suggest ancestral viruses closely related to today's SIV began infecting primates around 11 million to 16 million years ago, the researchers said in their study, published Aug. 20 in the journal PLOS Pathogens.

The researchers found unusual amino-acid changes in the TRIM5 protein in the Cercopithecinae monkeys not seen before in other species. When the researchers modified those amino-acid changes, TRIM5’s ability to recognize SIV strains in the Cercopithecinae was altered, but TRIM5’s ability to recognize other retroviruses remained the same, Johnson told Live Science.

The researchers reconstructed the million-year-old genes and modern TRIM5 genes and exposed various retroviruses to them in order to see which TRIM5 genes were resistant to which virus. The adaptations seen in the Cercopithecine version of the TRIM5 protein could resist infection only with lentiviruses found in those monkeys, and didn't protect against other lentiviruses, the researchers found.

The finding suggests that lentiviruses closely related to modern SIV were present in Africa and were infecting the ancestors of Cercopithecine primates as far back as 16 million years ago.

In humans, HIV progresses to full-blown acquired immune deficiency syndrome (AIDS) when the virus is able to attack a sufficient number of T-cells (a type of white blood cell that protects the immune system) in the body. Therefore, the idea that monkeys don't develop AIDS, which destroys the body's ability to fight disease, also supports the hypothesis that these monkeys spent a long time co-evolving with the virus.

HIV has been known for less than a century, and researchers are not yet sure of the exact amount of time humans would need to spend co-evolving with HIV to build a resistance to AIDS, Johnson said.

Humans may have avoided contracting HIV prior to the 20th century because they either weren't exposed to the virus or the virus would kill a human instantly and thus not spread, Johnson said. However, once the virus infected a particular person with the right mutations to allow the virus to take hold, the disease was able to infect other humans, Johnson added.