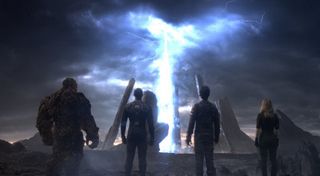 A quartet of intrepid explorers "cracks interdimensional travel" to gain superpowers in this month's "Fantastic Four" film. But Earth-bound explorers have found abilities nearly as otherworldly among this planet's own strange animals.

The latest adaptation of Marvel characters offers a sci-fi vision of the classic comics foursome: the elastic "Mr. Fantastic," the disappearing "Invisible Woman," the glowing "Human Torch" and the rock-plated "Thing."

To find such "fantastic" abilities on Earth, it only takes a trip to the deep ocean — or even just to the back porch. Meet the animal kingdom's "Fantastic Four."

Fictional character Reed Richards got his rubberized body after a cosmic encounter. But off the big screen, dwelling in tiny crevices on the seafloor, the stretchy, squishy octopus deserves the title of Earth's real-life "Mr. Fantastic." [Clever Creature: Photos of the California Two-Spot Octopus]

The octopus's unique body plan allows it to squeeze through spaces many times smaller than its own body: A 600-lb. (272 kilograms) octopus can squish itself through a passage the size of a quarter, according to National Geographic.

This eight-limbed beast can accomplish such feats due to its boneless body that relies on a hydrostatic skeleton, said James Wood, an octopus researcher at the Cephalopod Pageand co-author of "Octopus: The Ocean's Intelligent Invertebrate" (Timber Press, 2010). That is, instead of having hard parts like ribs or shells, octopuses squeeze water through their innards to maintain (and transform) their shapes. Aside from the beak and eye, the rest of the octopus resembles a stretchable mass of muscle and fluid.

"It's so stretchy and squishy that we have to use weight to describe their size," Wood told Live Science. "It's like describing the size of a piece of Play-Doh."

Those stretchable arms come with an enormous amount of control, too, as octopus nerves constitute a sort of distributed network, Wood said. Equipped with their own nerve cells called ganglia, severed octopus arms can "live on" for a while, continuing to grasp and change color, Wood said.

Sue Storm, the "Invisible Woman," returns from her extradimensional field trip with a power many embarrassed middle-schoolers would covet: She can become invisible.

The superheroine would encounter few invisible friends among her fellow terrestrial dwellers. But should she don scuba gear, she'd find the sea teeming with similarly concealed creatures. Up to a depth of about 3,280 feet (1,000 meters), around 50 percent of the animals display some degree of translucence, said Sönke Johnsen, a biology professor at Duke University.

And that translucence can truly mean invisibility, he said. "We can catch an animal in a bucket. It's 2 feet [0.6 m] long, 2 inches [5 centimeters] across, and we can see its shadow, but we can't see it," Johnsen told Live Science.

Marine animals use a number of tricks to harness the power of invisibility, Johnsen said. They lack any pigments. And they also avoid scattering light; to do so, the animals have very thin, pancakelike body plans, so light can easily pass through them, he said. Or, like the jellyfish, they may stretch a very thin living tissue over a big, gelatinous glob. [In Images: The Menagerie of Tiny Alienlike Creatures Under the Sea]

To prevent the reflection of light from their surfaces, these animals texture their skins. "This softens the boundary between self and water," Johnsen said, similar to how tiny holes in anti-echo ceiling panels soften sound reflection.

Such invisibility doesn't happen on land, for a number of reasons, Johnsen said. First, water has a much closer refractive index to organic material compared with air, meaning light bends more markedly when it passes from air to organic matter than it does from water to organic matter.Land animals also have to employ pigments to protect against ultraviolet radiation, whereas sea dwellers can rely on the ocean itself as a UV shield, he said.

Johnny Storm (Sue's brother) transforms into one of the most visually striking superheroes when he becomes the glowing, flaming "Human Torch."

Compliments to expectant mothers aside, most humans don't really "glow." But there's no technical reason they couldn't, as many creatures use a simple chemical reaction to do so, said Bruce Branchini, a bioluminescence researcher at Connecticut College.

That firefly reaction employs a simple set of ingredients: oxygen, ATP (a ubiquitous energy-storage molecule), minerals like calcium and magnesium, and an enzyme called luciferase, Branchini told Live Science. The insects flash by controlling when oxygen enters the "reaction chamber" tube in their bodies. Nerve impulses control this entry of oxygen. In marine creatures, where such bioluminescence is very common, similar enzymatic reactions occur, though often with different ingredients, he said. [Gallery: Eye-Catching Bioluminescent Wonders]

Mammals such as humans have most of the chemical equipment needed for such light shows, Branchini said, including enzymes similar to luciferase.

"There aren't any examples of mammals emitting light," he said. "But there's no reason I can think of that it wouldn't be possible."

Mammals don't glow for the simple reason that they have no need to do so —  "there's no evolutionary driver," Branchini said. While fireflies and deep-sea creatures use bioluminescence for everything from signaling mates to scaring away predators, "mammals have all kinds of ways to solve communication and predation," he said.

Like the Human Torch, a few creatures known as extremophiles also exhibit remarkable comfort with high temperatures. The Pompeii worm (Alvinella pompejana), for example, lives in tubes on deep-sea thermal vents, and the worms can withstand temperatures spikes up to 185 degrees Fahrenheit (85 degrees Celsius) in their tubes, said Craig Cary, a marine biologist at the University of Delaware and the University of Waikato in New Zealand. [Extreme Life on Earth: 8 Bizarre Creatures]

"They're probably the hottest metazoans [multicellular animals] on the planet," he told Live Science.

Out of all four of Marvel's fantastic heroes, Ben Grimm undergoes the most difficult transformation, becoming the rock-encrusted, superstrong "Thing."

While Ben's new visage makes him — to put it lightly — unique among humans, he'd fit in quite well among many animals. The armadillo, for instance, wears a flexible suit of stony armor that protects it against fangs, claws and other attacks. (Armadillos can even be somewhat orange, like Ben.)

The combination of flexibility and protection has inspired some engineers to model human armor after the armadillo. By attaching several plates of glass to a rubber surface, Francois Barthelat, a mechanical engineer at McGill University in Canada, was able to imitate armadillo defenses. Barthelat's analysis even showed that the platelike structure not only adds flexibility, but also improves defense against puncture.

"What's really interesting is the way armadillos will use flexible armor, solving the contradiction between strong material and flexibility," Barthelat told Live Science. A certain walking rock might agree.

Barthelat's lab has since expanded to using 3D-printed ceramics in different, overlapping shapes, which the researchers then model computationally. This modeling, in turn, has shed light on how armadillo armor works. "We found that the mechanism of adhesion between the soft surface and the armor material is critical," he said.