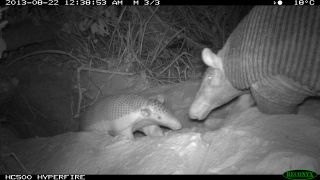 A baby giant armadillo and its mother. This is first footage of a mother and its baby.
(Image: © Arnaud Desbiez)

Like phantoms of the Amazon, giant armadillos are barely known and rarely seen, as they dig deep burrows to hide themselves during the day and only come out at night.

Growing up to 5 feet (1.5 meters) long from snout to tail, these armadillos are always on the move, and generally only stay in their 16-foot-deep (5 m) holes for two nights before excavating new ones. New research shows that these burrows are surprisingly important for other animal communities in the area and provide shelter for at least 25 other species, from tortoises to lesser anteaters.

"Giant armadillos are like 'ecosystem engineers,' providing homes for many other animals," said Arnaud Desbiez, a conservation officer with The Royal Zoological Society of Scotland who is based in southwestern Brazil's Pantanal, the world's largest freshwater wetland, where the study was conducted.

In the study, published in the September issue of the journal Biotropica, Desbiez and colleague Danilo Kluyber set up camera traps in front of 70 giant armadillo burrows, which took photos of animals that came by to use the holes. The burrows provide a hiding place and home for many of these animals and shelter from the heat and cold, staying a relatively constant temperature, Desbiez told LiveScience. "Think of them like wine cellars," he said.

The mound of unearthed soil also attracted a variety of visitors, from pumas to tapirs (large piglike mammals), which use it as a resting spot and a place to forage — the freshly disturbed soil may attract insects and amphibians, Desbiez said. Peccaries, a type of wild pig, also visit these mounds to roll about and wallow, he added.

Little is known about giant armadillos (Priodontes maximus) because they occur in very low densities, are quite shy and are nocturnal. Very few giant armadillos had been seen before 2010, when Desbiez and colleagues started a project to capture the animals on camera. He and his colleagues have physically found 11 giant armadillos, to which they attached GPS tracking devices. These have shown that giant armadillos travel long distances, and occupy a home range totaling about 8 square miles (20 square kilometers), about six times the size of New York City's Central Park. For comparison, that's four times larger than the home ranges of tapirs, South America's largest land mammal, Desbiez said.

Seeing the animals is a rare treat for Desbiez. "It blows my mind every time I see one, and I'm always starstruck," he said. "It's such a prehistoric-looking animal, it feels like you're thrown back into the Pleistocene."

"Prior to Arnaud's work, we knew nothing of home range and activity patterns of giant armadillos; we had never seen infant giant armadillos, and we had no understanding of the nature and frequency of their burrowing," said John Gramieri, the mammal curator at the San Antonio Zoological Gardens & Aquarium, who wasn't involved in the study.

In one instance captured on camera, an ocelot and a six-banded armadillo visited the burrow at the same time, resulting in the little armadillo being scared off, Desbiez said.

Giant armadillos' role as ecosystem engineers make them particularly important to protect, Desbiez said. They are considered vulnerable to extinction by the International Union for Conservation of Nature, an environmental group, primarily because their numbers have declined in the past few decades due to habitat loss. Although ranchers and farmers occasionally shoot them on sight due to a belief that they bring bad luck, the armadillos seldom interact with humans since they are so rare, he added.

The project took place on a private cattle ranch in the Pantanal known as Baía das Pedras, and was funded by zoos throughout the world, including in the United States, as well as the Royal Zoological Society of Scotland and a Brazilian NGO known as the Institute for Ecological Research.

The burrows may also "serve an important role as crossroads for disease vectors," or animals that carry pathogens, "and their hosts," Gramieri said. "In the most simplistic of analogies, it is as though giant armadillos are itinerant constructors of hotels — these hotels serve as both refuges for those seeking safety, and sites at which diseases can be spread," he added.