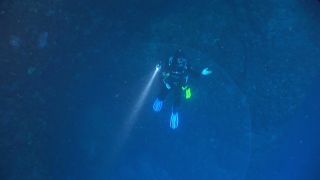 A diver shines a light on the bloblike egg nest.
(Image: © Screenshot of Vimeo "The Thing" by Luftu Tannover)

Divers often swim past bizarre creatures of the deep, but an elephant-size, jellylike blob left a group of them mystified.

The transparent sphere floated about 72 feet (22 meters) below sea level off the Mediterranean coast of Turkey. It sparkled like a ball of glitter when the divers shone their flashlights through its surface, but Lutfu Tanriover, an underwater photographer and videographer with Derin Underwater Film, and his co-divers had no idea what it was, according to Deep Sea News.

They got their answer after uploading the video online. [Photos Reveal Mysterious Deep-Sea Vampire Squid]

Those glittery specks are squid eggs, and the blob is called a squid egg mass, said Michael Vecchione, director of the NOAA National Systematics Laboratory at the Smithsonian and a curator of cephalopods at the National Museum of Natural History in Washington, D.C.

The divers are lucky to have found one so close to shore, said Vecchione, who wasn't part of the dive. Squids are pelagic, meaning they typically live in the open water far from the coast.

"We don't know exactly how many eggs are in there," but it’s likely on the order of thousands to tens of thousands, Vecchione told Live Science.

Each oblong egg is about 0.07 inches (2 millimeters) long. The female embeds them in a gelatinous  matrix that grows larger as it mixes with seawater. The resulting egg mass can be enormous — the divers estimated the newfound blob measured about 13 feet (4 m) in diameter, Vecchione said.

It's rare to find these giant egg masses in the wild, but researchers in 2006 discovered a "semi-transparent grey cloud" measuring between 9.8 feet and 13.1 feet (3 m and 4 m) in diameter off the coast of California. The egg mass belonged to a Humboldt squid (Dosidicus gigas), and held between 600,000 and 2 million eggs, the researchers wrote in the 2008 study published in the Journal of the Marine Biological Association of the United Kingdom.

Vecchione suspects the red flying squid (Ommastrephes bartramii) laid the egg mass in the Mediterranean. These squid can reach about 4.9 feet (1.5 m) in length, and are voracious predators, he said. The large squid feed on fish and other squid, grabbing their prey with the toothed suckers on their tentacles and then stuffing it into their powerful beaks.

"They can bite extremely hard," said Vecchione, who has seen them bite through the hard plastic used to make fishing lures.

O. bartramii are also prey for large fishes, such as swordfish and tunas, he said. This may explain why they lay so many eggs.

"If you have an animal that makes a million babies, for the population to remain stable, only two of them [need to] survive," Vecchione said. "Lots of things like to eat them, including people."

Scientists have never seen an O. bartramii create an egg mass in the wild, and they're not sure how the female mixes the sperm with the eggs in the process, he said. But research on other squid from the same family provides a clue about how long they last: Typically, the eggs hatch quickly, within about three days, when the young are still developing, he said.

If a predator doesn't gobble them up, squid usually live for a year or two, eating heaps of sea life to support their fast metabolism.

"They are very important in the food web," Vecchione said. "They live fast and die young."

Editor's Note: This article was updated to refer to the gelatinous ball as an egg mass.