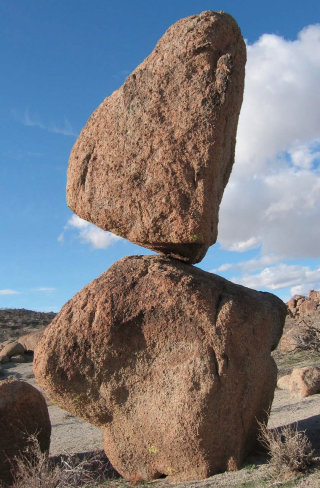 Giant rocks stacked in seemingly gravity-defying poses could indicate that earthquakes on the San Andreas Fault can jump to another major fault in Southern California, which in turn could affect the severity of quakes in the region and how the state prepares for future temblors.

The delicately balanced rocks do not topple, despite being near active faults, which likely indicates that earthquake tremors generated by the San Andreas Fault — the 800-mile-long (1,287 kilometers) fault that cuts through California and marks the boundary between the North American Plate and the Pacific Plate — are able to transfer to the neighboring San Jacinto Fault, weakening overall shaking in the areas where the rocks sit, the researchers said.

The granite rocks, called Precariously Balanced Rocks, or PBRs, form when tectonic processes allow a big chunk of rock, tattooed with patterns of fractures, to ascend from beneath the surface of the Earth. As the rock rises, wind, water and other natural processes erode bits and pieces of it away, eventually chiseling out the remaining delicately balanced rocks, said study co-author Julian Lozos, a postdoctoral researcher at Stanford University. [See Photos of the World's Weirdest Balancing Rocks]

PBRs typically develop over thousands or tens of thousands of years, and they can be found around the globe, including in other earthquake-prone spots in the United States and New Zealand, the researchers said. There are more than 1,200 PBRs just in California and western Nevada, they added.

In the new study, the researchers focused on PBRs that are approximately 10,000 years old, located in the middle of the San Bernardino Mountains, about 90 miles (145 km) east of Los Angeles.

Locating PBRs near active faults could help officials plan for future earthquakes. To prepare infrastructure — including the water supply, telecommunications and energy systems — in areas prone to shaking, "you would really like to have an idea of what to expect," said Lisa Grant Ludwig, lead author of the study and an expert on the San Andreas Fault at the University of California, Irvine.

The PBRs close to the faults "suggest that the San Andreas and San Jacinto can go off together, which would be a huge earthquake with a lot of impact for inland Southern California," Lozos told Live Science.

For the most part, the locations of PBRs make sense because they aren't typically as close to active faults as the ones the researchers studied in the San Bernardino Mountains, Grant Ludwig said. How the stacked rocks near the Southern California faults persevered had been a mystery, she added.

The researchers used 3D modeling to simulate how different kinds of shaking would affect various shapes and sizes of rock. Although some rocks are easily knocked over by fast, small shakes, other rocks topple to slow, big shakes, Lozos said.

The presence of PBRs close to the San Andreas Fault suggests that nearby earthquakes didn't happen very often, or happened with little energy, Lozos said.

A ruptured fault can either continue on the same fault, or "jump" to another one nearby, Lozos said. It's "like the rupture taking a different freeway exit," he added. Maybe the rupture is "charging down the San Andreas and decides to keep going or decides to take the exit onto the San Jacinto."

"If you had a rupture start on the San Jacinto and jump onto the San Andreas," less energy would transfer to the San Andreas Fault because the jump would absorb energy, Lozos said. When more than one fault is involved in an earthquake, it's called a "multi-fault" earthquake. [The 10 Biggest Earthquakes in History]

PBRs near the San Andreas and San Jacinto faults are also puzzling because the rocks are roughly 10,000 years old and earthquakes there typically occur every 200 to 300 years, Lozos said.

The two faults are caused up to 80 percent of the rugged landscape, often in the form of mountains, across the Pacific and North American plate boundary, according to the study. The San Andreas Fault marks where the North American Plate slides south at a rate of about 1 inch (2.3 centimeters) per year and the Pacific Plate slides north at 3 inches (8 cm) every year.

The San Jacinto Fault is part of the larger San Andreas Fault, and together the faults relieve most of the tension that builds between the Pacific and North American plates.

"Before an earthquake, a certain amount of stress will have accumulated on the fault," Lozos told Live Science. The ground starts to shake when the amount of stress rises high enough to overcome the strength of the fault, essentially rupturing it, he said.

The 1857 earthquake, and its major predecessor in 1812, are difficult to reconstruct since there were no seismic instruments to measure and record the shaking then, though there is evidence that the 1857 earthquake broke a portion of the San Andreas Fault that had ruptured in 1812.

The earthquakes in 1812 and 1857 caused significant damage to nearby towns, including severing tree roots and collapsing a bell tower at the nearby Mission San Gabriel. Yet the PBRs remain standing, which means something mitigated the shaking around them.

Damage to nearby towns also depends on which direction stress along the fault moves. If the rupture moves to the north, there will be stronger ground motion to the north, and vice versa, Lozos said, and there hasn't yet been a really energetic southward or northward rupture through the spot hosting the PBRs — yet.

Multi-fault earthquakes likely mitigated shaking around the PBRs near the San Andreas and San Jacinto faults, "but if you suddenly have two faults involved then you have a whole lot more potential for a larger earthquake," Lozos said.