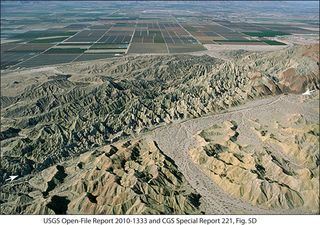 A small part of the San Andreas Fault that was thought to quietly slide without shaking its neighbors may actually be capable of strong earthquakes, including magnitude-6 shakers, a new study finds.

The San Andreas Fault is divided into three legs. The middle leg has long been treated as a benign barrier between the more seismically active northern and southern segments. That's because the central section "creeps" — rocks on either side of the fault slip past each other without snagging. On the other two legs, rocks lock together, building up strain that is unleashed as powerful earthquakes.

In the new study, researchers created a 3D computer model showing where the San Andreas Fault slips and where it is locked. The model is based on GPS measurements and satellite monitoring of surface deformations, such as tiny changes in elevation. The findings were published online Dec. 20, 2014, in the journal Geophysical Research Letters. [Photo Journal: The Gorgeous San Andreas Fault]

The new model is the best image yet of where the fault creeps and where it locks together, said Kaj Johnson, a geophysicist at Indiana University who was not involved in the study.

For instance, the researchers reveal new details about how the creeping and locked zones connect. Instead of sharp boundaries, each leg transitions between the different zones via a patchwork of stuck and sliding spots. The scientists identified three relatively large locked patches in these transition areas, each capable of generating magnitude-6 earthquakes. Two are in the north, near San Juan Bautista, and one is in the south, below the town of Parkfield. These locked patches (also called asperities) are storing up about 0.4 inches (1 centimeter) of strain per year, the study reports.

Scientists had thought that San Andreas Fault earthquakes primarily struck in the locked zones, so it was a surprise finding locked patches big enough to trigger sizable earthquakes in the creeping zones, said lead study author Romain Jolivet, a geophysicist at the University of Cambridge in the United Kingdom, who conducted the research as a postdoctoral scholar at Caltech in Pasadena, California.

"They're big enough to significantly affect the state of stress along the 1906 and 1857 rupture sections," he told Live Science, referring to years in which deadly earthquakes struck.

The patches may correspond to earthquakes that struck days before the magnitude-8 Fort Tejon earthquake in 1857, he said.

The study also pinpoints where there are big uncertainties in how well the GPS and satellite data matches the computer modeling.

"I think their probabilistic work has gone a long way toward proving that asperities really do exist on the creeping section, something that was not necessarily expected before," said Jeremy Maurer, a geophysics graduate student at Stanford University, who has done similar modeling work on the San Andreas Fault but was not involved in the new study.

"I think it is great that this study has come to many of the same conclusions that we did, including the implication that creeping section may have been involved in the initiation of the 1857 Fort Tejon earthquake," Maurer said.

Scientists have recently raised the possibility that an earthquake could rupture the entire length of the San Andreas. The biggest recorded earthquakes on the fault either started or stopped in the transition zones.