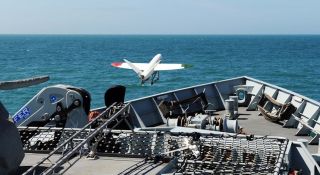 A 3D-printed drone launches off the HMS Mersey.
(Image: © University of Southampton)

A 3D-printed drone was recently launched from a British military warship and successfully flew to shore, a demonstration that could pave the way for futuristic spy drones that can be printed at sea.

Engineers at the University of Southampton, in the United Kingdom, built the unmanned aircraft using 3D printing, which has been used to create everything from pelvic implants to a prosthetic tortoise shell. The drone was launched off the front of the Royal Navy warship HMS Mersey. It flew approximately 1,640 feet (500 meters) in just a few minutes, and landed safely on a beach in Dorset, England, the researchers said.

The 3D-printed aircraft, dubbed SULSA, has a wingspan that measures 4 feet (1.2 m) long, and it can fly up to 60 miles per hour (97 km/h). Drones like these could one day be used for military surveillance because they can fly almost silently, the researchers said. [The 10 Weirdest Things Created By 3D Printing]

The real challenge, the engineers said, was to create a robust, fast-flying drone that can be assembled easily in less than 5 minutes without the need for bolts or screws. The SULSA aircraft is made up of four 3D-printed parts that click into place like a puzzle toy.

Keane, who led the project, said the use of 3D-printed unmanned aerial vehicles (UAVs), like SULSA, is increasing because they are relatively cheap and quick to make.

"Typically, the print run takes 24 hours,” Keane said in a statement. "It takes another 24 hours to cool, so from the time we send them the files to having the part in your hand, it takes 48 hours."

This type of convenience may be invaluable for the military, because it could enable warfighters to custom-design surveillance drones and print them on-site, in remote locations or even at sea. "These things could be printed anywhere," Keane said.

The defense industry has been using 3D printing technology for a while, including to produce guns. The finished product is also separate from the design, so pieces can be printed out wherever they are needed as long as a 3D printer is available, the researchers said. As such, warfighters wouldn't need to depend on factories back in their home countries, and the military could avoid lengthy shipping times for replacement parts, which could be intercepted by hostile forces.

In a statement, the Royal Navy said they were "delighted" to assist with the development of SULSA and that the test flight was a "small glimpse into the innovation and forward thinking" of the future of this aircraft technology.

"We are after more and greater capability in this field which delivers huge value for money," he said in a statement. "And because it's new technology, with young people behind it, we're having fun doing it."