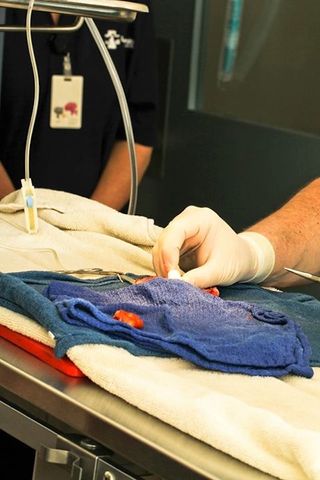 Pets are often people's closest companions, and many people will spare no expense in safeguarding their pets' health. Because of this, medical breakthroughs in human health have trickled down to pets.

Veterinarians now use some of the same tools to diagnose and treat animals as those used by their physician counterparts working in human hospitals. Sometimes, doctors from animal and human hospitals join forces to save a pet's life.

For instance, pediatric cardiologists and veterinary surgeons recently worked together in an operation to repair a cat's heart. The lucky feline will live out the rest of her eight lives with her owners in Mill Valley, California. Here is her story, along with some of the other amazing advances in animal surgeries. [In Photos: America's Favorite Pets]

Doctors at the University of California, Davis, helped treated a heart defect in Vanilla Bean, a 1-year-old Burmese cat. The team performed a rare open-heart surgery to correct the defect, which allowed blood to pool in the cat's heart. Without the surgery, the cat would have died of congestive heart failure. Although Vanilla Bean lost a lot of blood and needed transfusions of human blood from the hospital's blood bank, she survived the surgery and made a full recovery, according to the UC Davis Veterinary Medical Teaching Hospital.

Dogs have also reaped the benefits of open-heart surgery. In November 2014, a crowdfunding campaign raised $30,000 to bring a team of Japanese surgeons to Cornell University to perform a rare heart surgery on a man's much-loved pet dog. The seven-hour surgery repaired a defective heart valve in Esme, an adorable Japanese Chin. The delicate surgery required the use of a bypass pump, which takes over for the heart while doctors make the necessary repairs. Esme has fully recovered from her surgery, a statement from Cornell said.

Cesarean-section births are commonly performed in cats and dogs, and even turtles, to help mothers struggling with labor. But the procedure is rarely performed in primates and other large animals, and usually only in an emergency. For example, among orangutans, there are only about a dozen recorded C-sections among the 1,200 or so live births that have occurred in captivity. When a primate does need a C-section, as with open-heart surgery, the medical team helping the laboring mother often includes doctors with experience doing the procedure on women.

When a baby orangutan was delivered by C-section at the University of Minnesota in 2015, the medical team included human obstetricians, neonatologists and veterinary anesthesiologists. In the past year, the San Diego Zoo also delivered a baby gorilla by emergency C-section. All the orangutan and the gorilla babies and mothers survived.

Doctors now routinely remove brain tumors from creatures great and small — even the really small. In 2014, a team of surgeons in Australia sliced out a cancerous growth from a goldfish's head. (Goldfish can live for more than 40 years, so the surgery offered the pet many more years of life.)

Brain surgery is also performed on pets and zoo animals to correct conditions such as Chiari malformations (in which brain tissue extends into the spine) and hydrocephalus (the presence of fluid in the brain), which also occur in humans. A 330-lb. (150 kilograms) lion named Ramses was operated on for a Chiari malformation in 2013 at the University of Tennessee. In people, the disorder causes dizziness and headaches, among other symptoms. [Gallery: Amazing Photos of Goldfish's Life-Saving Tumor Surgery]

A missing nose or a mangled jaw can easily be repaired by animal doctors, whose skills rival those of human plastic surgeons. For instance, veterinarians can craft new eyelids out of cheek and mouth tissue for cats born without these body parts. And fur can hide a lot of scars.

Even a dog missing half its face has a chance to live normally. That was the case for Kabang, a dog in the Philippines who was severely injured while saving two girls from an oncoming motorcycle. Skin grafts were used to cover up the gaping hole on her face, and she can still eat and smell.

Just as 3D printing is being used to create bionic structures for people, it is also being used to create prosthetic limbs for pets, and jaws and beaks for turtles and birds. In Colorado, a tortoise with a damaged, infection-prone shell is now sporting a bright red replacement designed and printed by students at Colorado Technical University.