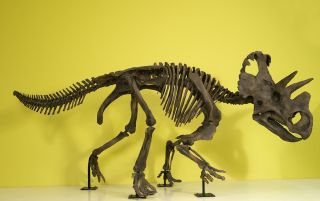 At the Royal Ontario Museum in Toronto, a reconstruction of Wendiceratops’ skeleton is on display.
(Image: © Brian Boyle)

The 79-million-year-old bones of four pickup truck-size horned dinosaurs have been unearthed in Alberta, Canada, and the discovery reveals how the distant relatives of Triceratops got their horns, a new study finds.

Wendy Sloboda, a renowned fossil hunter, discovered the fossils in 2010 while walking her German shepherds in the badlands of southern Alberta, just north of Montana.

"She said, 'I found some ceratopsian material,' which she knows I love," said co-author Michael Ryan, the curator and head of vertebrate paleontology at the Cleveland Museum of Natural History. "Almost as soon as we saw it, we thought we had something new." [See Photos of the New Species of Horned Dinosaurs from Alberta]

The researchers spent two summers jackhammering the side of the cliff to reach the fossils. Soon enough, they saw that the bone bed contained three adults and one juvenile. They named the new species Wendiceratops pinhornensis, combining Sloboda's first name, Wendy, with the Greek word ceratops, which means "horned face." The species name refers to Pinhorn Provincial Grazing Reserve in Alberta, where the researchers uncovered the fossils.

By examining about 200 bones from the four individuals, the researchers estimated that Wendiceratops pinhornensis measured 20 feet (6 meters) long and weighed more than a ton.

Like other ceratopsians, W. pinhornensis was an herbivore and likely grazed on low-lying plants with its parrotlike beak and leaf-shaped teeth. The dinosaur's skull also intrigued researchers: It has a distinctive, forward-curling frill on top.

"The wide frill of Wendiceratops is ringed by numerous curled horns; the nose had a large, upright horn; and it's likely there were horns over the eyes, too," study co-author David Evans, a curator of vertebrate paleontology at the Royal Ontario Museum in Toronto, said in a statement. "The number of gnarly frill projections and horns makes it one of the most striking horned dinosaurs ever found."

The nose horn was probably present in the Ceratopsidae common ancestor, the researchers said. It's possible that the male dinosaurs of the newfound species used their horns to fight one another for access to females or territory, Ryan told Live Science.

The finding, along with several others, suggests that North America was home to a wide variety of ceratopsids during the Cretaceous period, the researchers said. It also indicates that ceratopsid animals were evolving into new species at a fast rate early in their evolution, with some species lasting only 250,000 years or 1 million years, as opposed to between 2 million to 6 million years, the average timespan of vertebrate species, Ryan added.

"The diversity of this group of horned dinosaurs is way greater than we previously imagined," Ryan said. "It gives us some insights into the process of evolution in these types of dinosaurs and the rates at which they were evolving."

Alberta is a hotbed of newly discovered ceratopsian dinosaurs. In June, researchers announced the discovery of Regaliceratops peterhewsi, famously dubbed "Hellboy," a Triceratops relative that lived about 70 million years ago.

"I'd really thought that Alberta was more or less finished, that we knew its dinosaur fauna completely," said Peter Dodson, a professor of anatomy and paleontology at the University of Pennsylvania, and author of "The Horned Dinosaurs" (Princeton University Press, 1996).

"But I couldn't be more wrong," said Dodson, who wasn't involved in the new study. "We're learning much more about the ancestry and evolutionary diversification of horned dinosaurs."

The study was published online today (July 8) in the journal PLOS ONE.