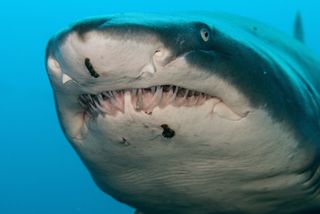 Fourth of July weekend is a popular time to hit the beach, but this year, vacationers may not be the only ones swarming the waters off North Carolina. In the past three weeks, there have been seven shark attacks along the state's coast, which may leave some beachgoers wondering if it's time to get out of the water.

Well, wonder no more. There's only one surefire way to avoid a shark bite this holiday weekend, and that's to stay on land, according to shark experts.

"A shark attack is an equation of shark plus human equals attack, and we can't really deal with the shark part that well, so we have to deal with the human part," said George Burgess, director of the International Shark Attack File at the University of Florida's Florida Museum of Natural History. [8 Weird Facts About Sharks]

Officials in North Carolina have not closed the beaches along the Outer Banks, a 200-mile-long (320 kilometers) stretch of barrier islands where two attacks occurred last month. But, the National Park Service (NPS), which maintains the string of beaches near Cape Hatteras, North Carolina — did issue a warning to beachgoers to stay on land.

"We can never guarantee anyone's safety when they enter the water," David Hallac, superintendent of the Outer Banks Group of the NPS, said in a statement. "The only way to be sure you do not encounter sharks, or other marine wildlife that may be harmful to humans, is to stay out of the water."

The NPS also had a few suggestions for those who just can't resist taking a dip. If you're going to swim, don't swim too far from shore, the agency posted on its website. Beachgoers should also consider swimming in groups, avoiding beaches where fishermen are casting their lines and staying out of the water at night.

However, the most recent shark attack, which occurred Wednesday (July 1) off Ocracoke Island, reinforces the fact that even following these guidelines won't guarantee safety. After all, the victim of that attack was swimming alongside another person, in the middle of the day, when a shark bit him several times. And, he was also only 30 feet (9 meters) offshore.

There are many factors that have likely contributed to the recent uptick in shark attacks, Burgess said. These include the presence of large groups of fish swimming right offshore, the high number of fishermen on the beach throwing bait into the water to catch these fish, the increased salinity of the water near the beach due to low rainfall (sharks like salty water) and the presence of adult sea turtles that are just now crawling ashore to lay their eggs on North Carolina's beaches.

Eventually, though, Mother Nature will step in to level the playing field between sharks and humans, according to Burgess.

"This pattern is not going to go on forever," he said. "It's not like suddenly there's a new order in shark-human relationships. Eventually, the appropriate modifications will occur in the environment that will bring things back to normal."

But until that happens, Burgess recommends working on your suntan on dry land.

Editor's Note: This article was updated to correct a statement about the presence of sea turtles along the North Carolina coast. Adult turtles are now nesting, which brings sharks closer to shore. However, baby sea turtles have yet to hatch.