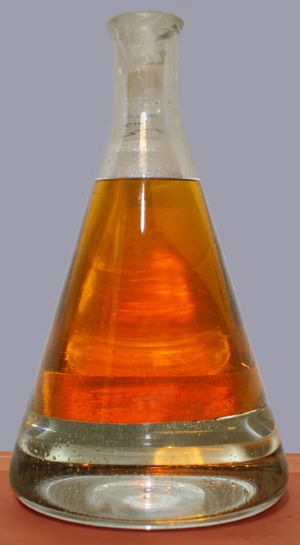 Green gasoline separates spontaneously from water at the bottom of the flask. This means less energy is needed for purification as compared to ethanol distillation.
(Image: © Virent Energy Systems)

Fossil fuels don't all come from fossils. Scientists now are developing gasoline that is synthesized from plants that are not so old. This so-called green gasoline is chemically derived from sugars in corn and other grains or from cellulose found in the tough, woody parts of plants. Unlike the most common biofuel, ethanol, this new fuel requires no tweaks to a car's engine. "It is virtually the same as gasoline from crude oil," said John Regalbuto, director of the Catalysis and Biocatalysis Program at the National Science Foundation (NSF). "It is a drop-in replacement for what you get at the pump." The NSF has funded several projects to develop green gasoline. One of these converts sugar into gasoline, diesel or jet fuel and is being commercialized by Virent Energy Systems in collaboration with the oil company Shell. A slightly different process discovered by researchers at the University of Massachusetts at Amherst can brew up gasoline components from wood chips and other plant refuse. All this new work involves chemical agents called catalysts, which reformulate plant sugars into the energy-packed molecules (called hydrocarbons) that fuel our cars, trains and planes. Catalytic conversions The catalysts are tiny metal particles usually embedded in a porous material. Chemical reactions occur on the metal surfaces at a much faster rate than they would in a liquid. Creating gasoline with catalysts is not new. Before World War II, the Germans developed a method to chemically derive synthetic fuel (or synfuel) from coal. The same process was resurrected when the oil crisis hit America in the 1970s, but the synfuel market collapsed when crude oil became cheap again in the 1980s. "No one had the foresight to keep up research and development in these catalytic processes," Regalbuto told LiveScience. When oil prices started to climb in recent years, many researchers instead looked to ethanol. "People have made ethanol for millennia, so that was the first wave of ideas," Regalbuto said. Ethanol is fermented from plants in a process that uses enzymes to drive the reactions, not catalysts. The advantage of enzymes is that they are very selective: they will target one type of molecule. Catalysts are more generic, so chemists have to be careful that unwanted reactions are not occurring on the catalyst surface. However, catalysts can work at high temperatures that would typically destroy enzymes. This allows the reactions to run much faster — more than a million times what they would at room temperature. Catalysts can also be used over and over, unlike enzymes. Paradigm shift Regalbuto thinks it's time for a paradigm shift in the biofuel market from "ethanol with enzymes" to "hydrocarbons with catalysts." The main reason is that hydrocarbon fuels, such as gasoline, diesel and propane, pack a lot of energy. Gasoline supplies 50 percent more energy per gallon than ethanol (and surprisingly 15 times more energy per mass than TNT). This is why cars running on ethanol get lower gas mileage than when they run on gasoline. Making hydrocarbons from plant materials is also more efficient than making ethanol. The primary reason for this, Regalbuto explains, is that removing unwanted water from ethanol production requires energy-intensive distillation, whereas hydrocarbons separate automatically from water. This efficiency could translate into lower costs. Virent estimates that a gallon of their green gasoline could be around 20 percent cheaper than a gallon of ethanol made from corn. Regalbuto predicts that green gasoline of some sort will be at the pump within the next few years. He realizes that further down the road people may start abandoning gasoline-powered cars for electric vehicles, but the market for hydrocarbons is unlikely to dry up. "We will still need diesel for big things like trains, planes and boats," he said.