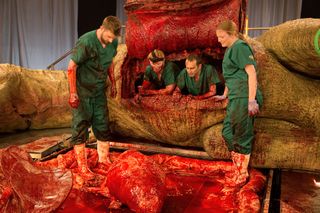 In an opener worthy of "Jurassic Park," a top-secret vehicle carries a Tyrannosaurus rex to a nondescript building sheltered behind a barbed wire fence, where four people anxiously await the beast's arrival.

The four medical and dinosaur experts, cloaked in scrubs and wielding knives and chainsaws, can't wait to autopsy the T. rex to learn what killed it.

Although the dinosaur in "T. rex Autopsy" is fake (made of Fiberglass, latex and silicone rubber, and holding 34 gallons of stage blood), the experts autopsying it are real. They advised National Geographic staff on how to accurately depict the fearsome carnivore for the TV special, which airs Sunday (June 7) at 9 p.m. EDT/8 p.m. CDT. [Gory Guts: See Photos of the Autopsy of T. Rex]

In fact, the T. rex model is based on decades of fossil research, as well as analyses of their living bird relatives and crocodile cousins.

"We know a lot from fossils — how big T. rex was, basically how much it weighed, what its body proportions were, how it fed, how it grew," said Steve Brusatte, an adviser and actor on the show, as well as a chancellor's fellow in vertebrate palaeontology at the University of Edinburgh in the U.K. "But there are some things we don't know a lot about, like the internal organs, since these are soft bits that rarely fossilize."

In these cases, they made their best educated guesses. For instance, researchers gave the T. rex model a powerful four-chambered heart, just like the hearts of crocodiles and birds. However, T. rex's two-chambered stomach is actually based on limited fossil evidence from "one amazing fossil with some preserved gut contents," Brusatte told Live Science in an email.

During the show, the experts leave no part of the dinosaur untouched as they slice, dissect and CT scan the carnivore and try to determine how it lived and died. But first, they marvel at the unique, 7-ton specimen. It has 50 serrated teeth, sports protofeather bristles on the back of its head, and was approximately 22 years old at time of death (according to the growth rings in its bones, which are similar to the rings on a tree).

They also mention the stench, which in real life would have been quite unpleasant.

Tori Herridge, a paleobiologist at the Natural History Museum in London, has real-life experience autopsying enormous, extinct animals. She took part in the autopsy of a woolly mammoth from the ice age, and recalled how the stench made her eyes and nose run nonstop.

"It absolutely reeks," she said in the show.

After surveying the beast, the experts waste no time in getting to work. Almost immediately, they find a fracture in its femur, or thighbone. But that wouldn't have been enough to kill it, so they persevere, diving into the dinosaur's belly and inspecting its major organs.

Unsurprisingly, everyone gets soaked in blood. But they're extremely enthusiastic about their work.

"Taking part in this program, as a consultant and then an on-screen dissector, was a real highlight of my career," Brusatte said. "It is such a remarkable opportunity to be able to present all of this exciting new scientific knowledge to the public, in such an engaging format."