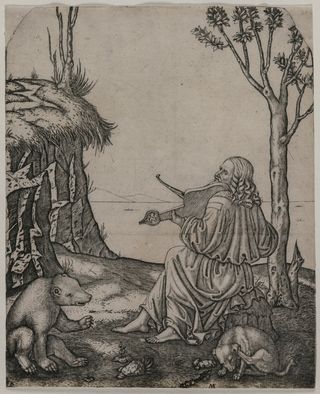 This engraving, created by Marcantonio Raimondi around 1505, may show Leonardo da Vinci playing an instrument called a lira da braccio. The man in the engraving was thought to be Orpheus, a musician in Greek mythology.
(Image: © Image courtesy Cleveland Museum of Art, 21.4 x 17.3 cm. Dudley P. Allen Fund 1930.579)

A 500-year-old engraving may show Leonardo da Vinci playing a musical instrument called a lira da braccio. If verified, the engraving would represent just the third contemporary depiction of da Vinci (created while he was alive) still in existence.

An artist named Marcantonio Raimondi created the engraving in 1505. But only recently did Ross Duffin, a music professor at Case Western Reserve University in Cleveland, identify the man in the engraving as Leonardo da Vinci, publishing the findings in the magazine Cleveland Art.

"This is serious and stands some chance of being right," said Martin Kemp, an emeritus professor of art history at Oxford University who has written extensively about da Vinci, but who was not involved in the new research. [5 Surprising Facts About Leonardo da Vinci's Life]

When the engraving entered the Cleveland Museum of Art's collection in 1930, scholars thought the man in it was Orpheus, a musician in Greek mythology who was said to be so talented he could charm animals with his music. As such, the engraving was dubbed "Orpheus Charming the Animals."

However, Duffin said he came to realize the man was unlikely to be Orpheus and more likely to be da Vinci taking on the role of Orpheus. During the Renaissance, "one thing that is extremely consistent is that Orpheus is shown as a clean-shaven youth, the young husband of the tragic Eurydice," wrote Duffin in the article.

The man depicted in the engraving is in his "late middle age, with a beard and centrally partedhair with long curls," wrote Duffin, adding that da Vinci would've been in his early 50s when Marcantonio Raimondi created the image.

Duffin compared the engraving with a portrait of da Vinci drawn by Francesco Melzi, "who joined the 54-year-old Leonardo's household as an assistant in 1506 and eventually became his principal heir," Duffin wrote.

"Melzi's portrait shows a man with a beard and long curls, and the very slight bump in his nose and the ridge above the brow are an excellent match for the long-haired, bearded [man] in the Marcantonio engraving."

Most telling is the instrument the man in the engraving is playing. Duffin identified it as a lira da braccio, a bowed string instrument that da Vinci is known to have played.

In 1550, a few decades after da Vinci's death, a historian named Giorgio Vasari wrote of da Vinci's great musical skill. In 1494, "Leonardo was led in great repute to the Duke of Milan, who took much delight in the sound of the lira, so that he might play it," Vasari wrote in his 1550 book "Le vite de' più eccellenti pittori, scultori, e architettori" (translated).

"And Leonardo brought with him that instrument which he had made with his own hands, in great part of silver, in order that the harmony might be of greater volume and more sonorous in tone, with which he surpassed all the musicians who had come together there to play," Vasari wrote. "Besides this, he was the best improviser in verse of his day."

If the engraving does indeed portray da Vinci, the question becomes how Marcantonio Raimondi met him.

"The problems are of time and place," Kemp wrote in the email. "Marcantonio was working in Bologna at this early stage of his career, and there is no obvious way they would have met."

At this stage, I would say that it is temptingly possible but unproven," Kemp added.

However, Duffin said the two men might have met in Milan in 1506-1507 during a production of "Orfeo,"an opera on the Orpheus myth. If this is the case, then Leonardo himself could have been playing Orpheus in the opera, Duffin said. Another possibility is that the two artists met in 1509, when Leonardo visited Florence. Or perhaps the two never met, and Marcantonio Raimondi used a portrait as a reference when engraving da Vinci's features, Duffin added.

"We do not know for certain whether Marcantonio crossed paths with Leonardo, but his engraving of 'Orpheus Charming the Animals' seems clearly to be an homage, intended to honor the musical skill of Leonardo da Vinci by depicting him with the instrument he was known to play incomparably, and which he shared with the greatest of all musicians."