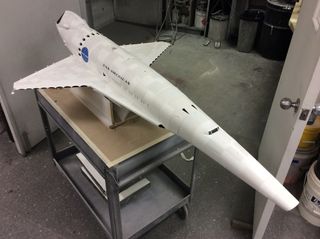 The proposed Museum of Science Fiction in Washington, D.C., plans to open its first exhibit on the future of travel this summer.

The exhibit, which will feature a large-scale Orion III space plane from Stanley Kubrick's film "2001: A Space Odyssey" and "retro-futuristic" travel posters by artist Steve Thomas, aims to open July 7 in the Ronald Reagan National Airport.

The exhibit will be accompanied by a website and mobile app that will give visitors information about the displays, an interstellar passport and a "boarding pass to the future," according to the Museum of Science Fiction staff. [Science Fact or Fantasy? 20 Imaginary Worlds]

"It really is our first opportunity to do something publicly, and demonstrate our capabilities," said Greg Viggiano, the museum's executive director. Viggiano first had the idea for the exhibit when he was walking through Reagan airport one day. Noticing the concourse's vaulted ceilings, he wondered, "Why isn’t there anything cool hanging up there?" he told Live Science.

The exhibit's main draw will be a model of the Orion III, a fictional shuttle operated by the airline PanAm in Kubrick's classic 1968 science fiction film, based on the novel by author Arthur C. Clarke.

Kubrick wanted to make the vehicle as realistic as possible, so he enlisted the help of Fred Ordway and Harry Lange from NASA's Future Projects Division. The film's production designer, Anthony Masters, turned the concept art into reality.

"Unfortunately, very few models remain from the film," Regan Samul, curator of the planned museum, says in a video on the organization's Kickstarter webpage. So, the museum's staff reached out to ScottModels, a 3D modeling company in Cincinnati, Ohio, to create a large-scale, screen-accurate model of the Orion III space plane.

The "2001" model will be displayed along with travel posters by artist Steve Thomas that depict imaginary destinations on planets and moons in the solar system. For example, one poster invites viewers to "explore the crimson canyons on Mars," while another offers the chance to "fly through the asteroid belt" on a rocket-propelled zip line.

The exhibit will be on display at Reagan National Airport from July through October. For those who can't see it in person, the museum is developing a companion website and mobile app that will offer a virtual tour. On the app and website, users can also plan an imaginary interplanetary trip, check in and print a boarding pass.

To complete the exhibit, the project team members hope to raise $7,500 through the organization's Kickstarter campaign, which has garnered about $3,500 so far.