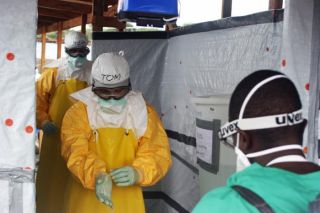 Staff members of Doctors Without Borders, conduct a decontamination process on Dr. Tom Frieden, CDC Director, who is dressed in his personal protective equipment and is exiting an Ebola treatment unit in Monrovia, Liberia in 2014.
(Image: © CDC/ Sally Ezra)

Liberia is set to be declared Ebola-free on Saturday (May 9), but experts say there's still a risk that the disease could reappear in the country.

The last person in Liberia to have Ebola died on March 27, which was 41 days ago. Health officials typically wait 42 days to declare a country Ebola-free, because this is twice as long as the 21-day incubation period of the virus (the time it takes for a person infected with the virus to show symptoms).

As the numbers now stand, there were 10,564 Ebola cases in Liberia, and 4,716 deaths from the disease in the country, according to the Centers for Disease Control and Prevention.

The reason for waiting twice the length of the incubation period is that health officials assume that "any missed cases would have popped up by that time," said Dr. Amesh Adalja, an infectious-disease specialist and a senior associate at the University of Pittsburgh Medical Center's Center for Health Security.

Since there have not been any new Ebola cases in Liberia for more than six weeks now, there's likely no Ebola transmission going on in the country that's being missed, Adalja said.

But there is still a concern that the disease could show up again in Liberia, because Ebola continues to be spread in the neighboring West African countries of Guinea and Sierra Leone.

"They're going to have to continue to fight the disease in the other two countries in order to prevent the disease from reoccurring," said Adalja, noting that the very first case of Ebola in Liberia was brought in from Guinea.

Still, even if new cases do occur in Liberia now, it's less likely that they will start another outbreak in the country, Adalja said. That's because Liberia now has increased monitoring and infrastructure in place to prevent new chains of Ebola transmission,.

"Liberia's come a long way from when this outbreak first began, and hopefully they're much better prepared in case there would be another case that ended up spilling over into that area," Adalja said. [Where Did Ebola Come From?]

It's the health system of a country that makes the difference between a single case of Ebola and an outbreak of the disease, said Dr. Joel Selanikio, an assistant professor of pediatrics at Georgetown University School of Medicine in Washington, D.C., who treated Ebola patients in Sierra Leone.

"A case of Ebola doesn't have to be a national emergency, if you have a health system that can deal with this," Selanikio said.

There are currently enough resources in Liberia to handle a single case of the disease, but it's not clear how long that will last, Selanikio said. It's unclear whether the facilities, training programs and equipment that have been put in place during this outbreak will still be operating in 10 years, he said.

But such resources will be critical to prevent future outbreaks, because the disease will almost certainly pop back up again as the population expands and increasingly comes into contact with the wildlife thought to harbor the virus, Selanikio said. "My biggest hope would be that we develop a vaccine so that Ebola becomes not a big deal at all," he said.

Another possible way the disease could appear again in Liberia is through sexual transmission. The last person to have Ebola in Liberia is actually thought to have contracted the disease through sex with an Ebola survivor, according to a recent report from the Centers for Disease Control and Prevention.

That report suggests that Ebola can survive in semen longer than previously thought — at least five months.

"People in Liberia will have to really adhere to the safe-sex counseling for up to five months after recovery [from Ebola] in order to minimize the risk that Ebola is transmitted sexually," Adalja said.

Still, sexual transmission is not likely to play a large role in the spread of Ebola. "Although it's a means for transmission [of] Ebola, it's not a major means of transmitting Ebola," Adalja said.