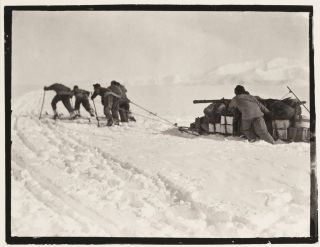 Photographs taken by explorer Robert Falcon Scott during his ill-fated trip to Antarctica are being auctioned off in London today.

The photos depict day-to-day life at the base camp on Antarctica's Ross Island in the months leading up to Scott's trek to the South Pole in 1911 — a journey from which he never returned. Scott and four other men from the so-called Terra Nova expedition perished on the long walk back from Earth's southernmost point. But the explorer's photos lived on, thanks to Herbert Ponting, the chief photographer for the Terra Nova mission.

As Scott and his team trudged toward the South Pole, Ponting stayed behind at the Ross Island base camp, where a relief party brought Scott's camera before the captain became stranded in the snow. Ponting developed the negatives in the camp's tiny darkroom and sent the photos home to England. Now, more than 100 years after the Terra Nova expedition, those photos will be up for sale at Christie's Auction House in London today (April 28), where they are expected to fetch at least $30,000 (20,000 British pounds). [See more photos from Scott's final mission]

The set of 11 photos shows some of the difficulties that Scott and his men likely faced on Antarctica's shores. In one photo, the hut that Scott and his men erected as a shelter sits under a blanket of snow on the banks of a frozen sea. In another, a group of men attempts to pull a heavily loaded sled through soft snow. In many of the photos, the various horses that the men relied on to carry gear over the treacherous terrain can be seen.

Scott's photos aren't the first bits of memorabilia to be auctioned off from his final expedition. In 2011, a set of photos taken by Ponting was sold at auction in Melbourne, Australia. Ponting's images depict the ship that bore the members of the expedition to Antarctica — the Terra Nova— as well as several photos of the dogs that accompanied the men on treks to various parts of the continent. One of the photos shows Scott in his tent, updating his journal just three weeks before he set out on the doomed march to the South Pole.

In 2014, conservationists from the Antarctic Heritage Trust in New Zealand discovered a 100-year-old notebook at the site of the Terra Nova base camp on Ross Island. George Murray Levick, a surgeon and zoologist who accompanied Scott to Antarctica, once owned the notebook, which contains dates and notes for the photos he took during the expedition.