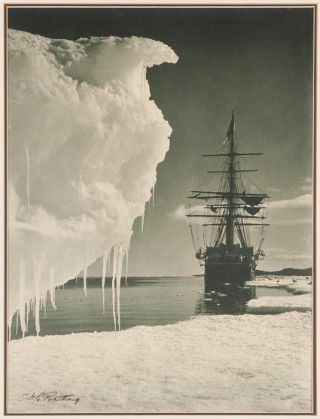 A photograph of the Terra Nova at anchor in Antarctica.
(Image: © Courtesy of Charles Leski, Leski Auctions.)

A research vessel testing its underwater mapping equipment recently made a remarkable discovery: the wreck of the Terra Nova, the famed ship that took British explorer Robert Falcon Scott on his fateful voyage to Antarctica a century ago.

The ship was discovered off the coast of Greenland on July 11. A crew aboard the Falkor, a research vessel operated by the Schmidt Ocean Institute (as in Eric Schmidt of Google fame), was testing the ship's acoustic sonar, when they spotted something unusual emerging from the seafloor data — a long, narrow shape that resembled a ship's hull.

A quick check of the length revealed it matched that of the Terra Nova: about 190 feet (57 meters), said Victor Zykov, Schmidt Ocean Institute's director of science.

Although it was a surprise, the find wasn't a total accident. Researchers and crew aboard the ship chose the ocean region near Greenland because the exaggerated seafloor topography offered just the sort of challenge needed to test the ship's equipment.

One of the Falkor's crew knew quite a bit about Terra Nova's history, and suggested they cover the area where the storied ship disappeared in 1943.

The three-masted ship, with a single funnel rising from the wooden deck, was built in 1884. It ferried Scott and his men to Antarctica in 1910, and remained there for nearly three years, sailing away from the continent without Scott — and the four men who died at his side — in 1913. [Images from Scott's Last Expedition]

Three decades later, the Terra Nova was being used as a work ship by a seal fishery. In September 1943, it began to take on water. All the men on board were saved, but the ship disappeared into the frigid sea.

The Falkor crew sent a camera overboard to take a closer look at the wreck, and the images sent back from the seafloor further confirmed their suspicions. A video revealed a single funnel, a bridge and masts that appear to match the build of the Terra Nova.

Zykov said his organization has been asked to keep the exact location and depth of the Terra Nova secret for now, to prevent anyone from disturbing the wreck.

Scott's ill-fated attempt to become the first man to reach the South Pole, a trek that claimed his life, is known as the Terra Nova expedition, named for the ship that carried him there.