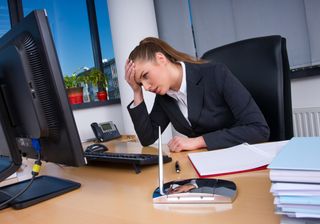 Too much time spent sitting at work and during off hours may increase women's risk of breast and endometrial cancer, a new study from Sweden suggests.

Researchers analyzed information from more than 29,000 Swedish women ages 25 to 64 who did not have cancer at the study's start. The women were followed for about 25 years.

Women who were not active at their work or in their leisure time were 2.4 times more likely to be diagnosed with endometrial cancer (a cancer of the uterus lining), and also 2.4 times more likely to be diagnosed with breast cancer before menopause, compared with those who were active at their jobs and in their leisure time. There was no link between inactivity and an increased risk of breast cancer after menopause. [5 Tips for Sitting Less During Your Work Day]

People who work in offices can do small things throughout the day to reduce their siting time, such as getting up for coffee or walking to work, said Anna Johnsson, one of the authors of the study and a physical therapist at Lund University in Sweden.

And a 2011 study estimated that being inactive was linked to as many as 49,000 cases of breast cancer each year in the United States. (There are about 230,000 cases of breast cancer diagnosed yearly in the United States, according to the National Cancer Institute.)Some studies have suggested that taking short breaks throughout the day to move around reduces levels of molecules in the blood that are linked with cancer risk.

The new study was presented this week at the meeting of the American Association for Cancer Research in Philadelphia.