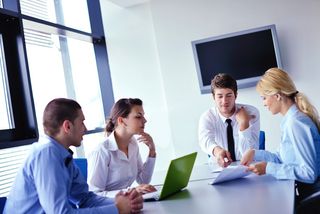 Sitting for prolonged periods daily can increase the risk of a number of health conditions.
(Image: © Office workers photo via Shutterstock)

The more time people spend sitting, the higher their risk of certain types of cancer, according to a new review of previous studies.

What's more, it didn’t matter how active the study participants were when they were not sitting, according to the findings, published today (June 16) in the Journal of the National Cancer Institute.

In the United States, 4.8 in 100 people get colon cancer during their lifetime, and 2.7 per 100 women get endometrial cancer, said Dr. Graham Colditz, of the Siteman Cancer Center and Department of Surgery at the Washington University School of Medicine in St. Louis, who wrote an editorial accompanying the study.

In the new review, the researchers analyzed data from 43 previous observational studies, which looked at more than 4 million people, including nearly 70,000 who had cancer. The data in the studies came from interviews and questionnaires.

"One of the reassuring features was how consistent the results are across the studies," Colditz told Live Science. "There was not a lot of variation."

Research on the negative consequences of sitting dates back to the 1960s, Colditz said, when researchers examined how postal workers who walked a lot every day had lower rates of mortality from colon cancer compared with accountants and other office workers.

As for the potential mechanism behind the association between sedentary behavior and increased cancer risk, a number of factors may be at play, Colditz said.

"Obesity is a major driver for multiple cancers," and research has shown that obesity and sedentary behavior are related, Colditz said. Studies have also shown that more time spent sitting after meals is related to higher blood-sugar levels, which have also been associated with an increased risk of colon cancer, he said.

So, what are people supposed to do if their jobs require them to sit for long periods of time?

The researchers recommend that people break up the time they spend sitting by incorporating some sort of light physical activity into their daily routine.

"For example, instead of calling your colleagues on the phone or sending emails, you may walk down the aisle or take the stairs to reach their office," Schmid said.

And although the study showed an increased risk of cancer regardless of people's overall physical activity, the researchers still said that exercise in any form is beneficial to overall health.

"If people are not warm to a morning jog, then walking or bicycling to the workplace, or inserting a brisk lunchtime walk may bring benefits for your health," Schmid said.