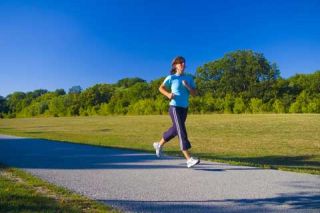 You don't have to go to the gym to boost your fitness level. Simply walking around the office, taking the stairs instead of the elevator or doing household chores can help, a new study says.

The results suggest so-called incidental physical activities, or activities in your everyday life that are not exercise per se, but get you moving nonetheless, can measurably improve fitness.

In the study, the more time a people spent on incidental physical activities, and the more intense the activity was, the better their cardiorespiratory fitness, a measure of their aerobic fitness level.

The researchers estimated a 30-minute increase in moderate physical activity achieved through everyday activities could reduce the risk of cardiovascular disease by 15 percent.

"It's encouraging to know that if we just increase our incidental activity slightly — a little bit more work around the house, or walking down the hall to speak with a co-worker as opposed to sending an email —we can really benefit our health in the long-term," McGuire said.

The study, conducted in Canada, involved 135 inactive men and women who carried extra pounds around their belly. Participants wore an accelerometer around their waist for one week to track their movements. The researchers measured their cardiorespiratory fitness with a treadmill test.

None of the participants met government recommended levels of physical activity (which are the same in Canada and America) that advise people to get 150 minutes of moderate-to-vigorous physical activity per week, achieved through bouts of exercise sustained for at least 10 minutes at time.

The findings counter the idea that, to improve your fitness level, you have to elevate your heart rate to a considerable degree and maintain the activity for at least 10 minutes, the researchers said.

However, this doesn't mean you should skip the gym entirely. If incidental activity can improve your fitness, then structured activity, in which you intend to break a sweat, would be even more beneficial, McGuire told MyHealthNewsDaily.

The article was published in the April issue of the journal Medicine & Science in Sports & Exercise.

Pass it on: Activities other than exercise that get you moving throughout the day can improve your fitness.