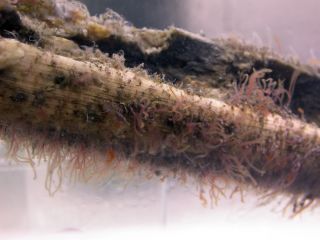 Bone-eating worms that can devour an entire whale carcass were also feasting on prehistoric reptiles more than 100 million years ago, a new study finds.

No one knows when the first Osedax worms started scavenging sunken carcasses on the ocean floor. The bizarre, finger-length worms are soft-bodied and leave no fossils behind, so their origin is lost to time. But traces of the creatures' strange dining habits can be detected on ancient fossils.

Osedax not only feast on dead whales today, the worms also bored into 100-million-year-old plesiosaur and sea turtle bones, scientists from Plymouth University in the United Kingdom report today (April 14) in the journal Biology Letters.  [The 12 Weirdest Animal Discoveries]

Paleontologist Silvia Danise hunted through gnarly bones in the drawers and displays of the Sedgwick Museum in Cambridge to find fossils gnawed by Osedax. "I was looking for things that were weathered, or with an irregular surface, which is what happens in the modern bones that are attacked by Osedax," said Danise, lead study author, who is now at the University of Georgia in Athens.

Bone-eating worms are amazingly effective eaters for creatures with no mouths or guts. (Some species use acid instead.)  The worms were discovered in 2002 on the seafloor offshore California, gorging on a whale. How the worms eat remains a mystery, but scientists think the creatures extend fleshy tendrils laced with symbiotic bacteria into the bone. The tendrils carve through the nutrient-rich tissue and extract collagen and fat with help from the bacteria. This eating action leaves behind an empty pocket that resembles a tree stump with roots.

Danise hit pay dirt with several old bones from the end of the Mesozoic era, before the Cretaceous mass extinction that killed off the dinosaurs and the plesiosaurs 65 million years ago. There were distinctive round boreholes and rootlike cavities in bones from turtles and plesiosaurs (bus-size, flippered marine reptiles).

With co-author Nicholas Higgs, Danise scanned the fossils with micro-CT (similar to a medical imager) to confirm each bone carried the worm's characteristic cavity. The fossil holes were nearly identical to bones munched by modern Osedax worms, and also a good match to more recent fossils, the study reported.

The fossils can now be used to calibrate genetic evidence, called a "molecular clock," which suggests Osedax worms first emerged during the Mesozoic about 125 million years ago, Vrijenhoek said. An alternate model had Osedax appearing with the first whales some 45 million years ago. A better molecular clock will also help researchers who study the bone-eating worm's relatives, such as the strange pink and red worms that thrive at deep-sea hydrothermal vents.

And researchers are still finding new Osedax species around the world to add to the family tree, with 17 new worm species discovered in California's Monterey Canyon in recent years, said Greg Rouse, a marine biologist at the Scripps Institution of Oceanography in La Jolla, California.

"We are still barely scratching the surface of their diversity," said Rouse, who was not involved in the study. "It's just an amazing innovation by animals to exploit a food resource."

The new findings also lend support to the idea that Osedax is an opportunistic eater. After the Cretaceous extinction, big marine vertebrates disappeared from the oceans until the first whales swam the seas. During this 20-million-year gap, Osedax survived on the carcasses of large fish and sea turtles, the fossils suggest.

"It doesn't matter if it's a dinosaur, a turtle or a fish, bone composition is always the same," Danise said.