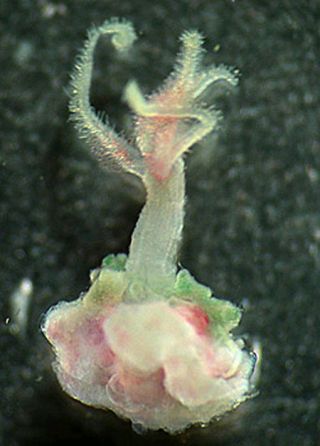 Scientists have identified more species of boneworm, a recently discovered worm that lives on the seafloor and feeds on dead carcasses. Here, a female boneworm that has been removed from the whale bone.
(Image: © Greg Rouse, Scripps Institute of Oceanography, UCSD.)

Some truly strange creatures can be found on the ocean seafloor, and boneworms are among the most bizarre — they have no eyes or mouth and feast on the bones of dead whale carcasses.

Now scientists have identified even more species of this recently discovered worm, and their analysis reveals additional clues to when the creatures first evolved.

Boneworms, belonging to the genus Osedax, were first discovered back in 2002 off the coast of California in an underwater valley called the Monterey Canyon. Since then, the researchers that made the find have been uncovering details about the life cycle and eating habits of these worms.

Between 2004 and 2008, the team, from the Monterey Bay Aquarium Research Institute, sank five whale carcasses into the bay, providing a cornucopia for their research subjects.

They found that the worms begin life as microscopic larvae floating through the deep ocean. When the larvae encounter a dead animal, such as a whale or elephant seal, they settle onto its bones. The worms then sprout up, looking a bit like tiny trees. At one end are root-like structures that grow into the bone. The scientists suspect that bacteria in these roots break down proteins within the bone, which supply nutrients for the worms. At the other end are feathery appendages called "palps," which take in oxygen.

When these worms sexually mature, they all turn into females. But larvae that land on the female boneworm's palps develop into male worms, although they remain microscopic in size. The male worms fertilize the females' eggs, which are then released to start the cycle over.

Initially, the researchers identified five species of boneworms. In the new study, they found an additional 12 species from analyses of the worm's DNA.

Not all boneworms look alike. Their feathery palps can be red, pink, green or even striped. And some don't have feathers at all.

The researchers also attempted to calculate how long these worms have been around by estimating how fast their DNA mutates. With one particular estimate for the mutation rate, they hypothesized that the worms evolved 45 million years ago, which is around the time that large whales first appear in the fossil record. A second, slower estimate suggests that the worms may have evolved 130 million years ago, in which case they could have eaten the bones of ancient sea reptiles.

Further study of whale and marine reptile fossils for the remains of worm roots could help pin down the time period in which the worms evolved, the researchers suggest.

The study was published Nov. 10 in the journal BMC Biology.