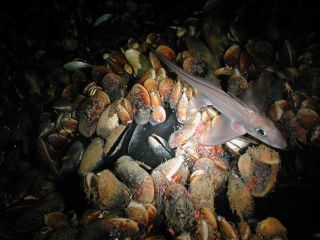 Black, oxygen-depleted briney water is visible beneath a mussel bed deep below the Gulf of Mexico in an NSF-funded exploration of strange habitats in largely inhospitable conditions.
(Image: © Ian MacDonald, Texas A&M University)

Strange communities of extreme microbes in hostile, otherworldly environments have been discovered at the bottom of the sea in the Gulf of Mexico, scientists announced today.

They found reddish microbial oozings, along with volcanoes, craters, bubbling gas, mud pots and even dancing eels that seemed to follow the window of a moving deep-sea submersible craft.

"These are the kind of scenes I imagine could exist on distant planets or other astronomical bodies," said Samantha Joye, a University of Georgia researcher who led an expedition to explore deep-sea mud volcanoes nearly 2,000 feet (600 meters) beneath the ocean surface.

Life as we know it

Such deep-sea vents are candidates as birthplaces for the first life on Earth, other studies have concluded. Yet little is known about them. Only about 5 percent of the world's ocean floors have been explored. By contrast, the far side of the moon is well mapped.

Results of the study, detailed in the April 6 issue of the journal Nature Geosciences, have implications for understanding early life on Earth as well as the potential for life on Mars and other worlds, such as Jupiter's Europa, where similarly extreme conditions might support microbiological life.

"Here we have more fascinating examples of microbial life coping with very, very unusual environments — regions of the ocean deeps that we can't help but describe as extreme or harsh," said Phillip Taylor, head of the National Science Foundation's Ocean Section. "Yet life has clearly adapted to exist, even thrive, in these systems. Such discoveries can't help but lead us to think that life beyond Earth is probable. Also, the discoveries of the evolved strategies for survival in unique environments have the potential to yield new uses of microbial processes and products in the biotech arena."

The expedition, taking researchers to the seafloor in small submarines, examined an area in the Gulf of Mexico where clusters of seafloor vents spew mud, oil, brine and gases that support food chains independently of the sun, which gives life to much of the biology on the planet.

Brine pools are ponds of hyper-saline water that fill a seafloor depression without mixing with overlying seawater. These types of ecosystems — which have only rarely been studied by microbiologists or visited by anyone — are particularly hostile to much of life because they are devoid of light and oxygen, and are super-salty and bathed in noxious gases.

"Near mud volcanoes, we saw thick plumes of gas bubbles ejected from boiling mud pots that are similar to those found in Yellowstone National Park," Joye explained. "These gas plumes, consisting mainly of methane, extended hundreds of meters from the sea floor."

The volcanoes erupt as often as daily, and the mud volcanoes and brine pools last just tens of thousands of years — short by geological standards. That means life must adapt quickly to survive.

The scientists found evidence of this.

"The diversity and distribution of the microbes we studied say a lot about how life adapts to extreme environments," Joye said. "We believe that the composition of the microbial communities and their metabolisms are linked to environmental differences, mainly in the geochemistry and intensity and frequency of fluid expulsion between the sites."

"If these microbial communities are unique to each extreme environment, then how do the microbes that live in mud volcanoes reach and colonize these remote ecosystems in the first place or, for that matter, locate other mud volcanoes?" said Lita Proctor, an NSF program director. "Do they patiently wait in the ocean floor until a new mud volcano bursts through, or do they somehow migrate between mud volcanoes?"