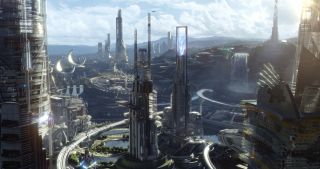 Inspired by the upcoming film "Tomorrowland," Disney and X Prize are inviting kids to submit their ideas for future inventions in a video competition.
(Image: © Disney)

Whether they're designing flying cars or teleporters, aspiring young inventors will have the chance to share their visions for the technology of the future, as part of a nationwide challenge hosted by the makers of Disney's upcoming film "Tomorrowland" and the nonprofit organization X Prize.

The competition invites kids ages 8 to 17 "to imagine themselves in the future and report back to the present" through video, images or stories about one new futuristic invention or technology, how it works and its impact on the world, according to the contest rules.

"The future will be steered by the imaginations of our young people, and Disney is thrilled to work with X Prize to encourage and inspire the next generation of thinkers and dreamers to build the future they imagine is possible," Sean Bailey, president of Walt Disney Studios motion picture production, said in a statement. [Hyperloop, Jetpacks & More: 9 Futuristic Transit Ideas]

Each of the six winners will be assigned a mentor in his or her area of interest, and will receive a check for $3,000; a 3D printer; and free registration for the 2015-2016 FIRST LEGO League robotics competition in the United States.

Disney joined forces with X Prize, the organization that hosts grand challenges such as the Google Lunar X Prize, to create the challenge, which was inspired by the upcoming film "Tomorrowland." The film, which premiers in U.S. theaters on May 22, is about a jaded former boy genius (played by George Clooney) and an optimistic teenager (played by Britt Robertson) who embark on a mission to a mysterious and futuristic place "somewhere in time and space that exists in their collective memory," according to the film's official website.

The competition will be divided into two groups: a junior division for 8- to 12-year-olds, and a senior division for 13- to 17-year-olds. The consent of a parent or legal guardian is required to participate, the event's organizers said. Registration begins April 22, and the contest will end May 17.

A panel of judges, appointed by X Prize, will assess each submission based on innovation, creativity and presentation, the contest organizers said.

More information can be found on the contest website.