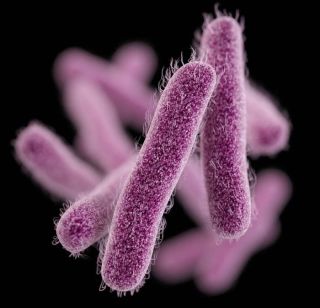 Americans who travel abroad are bringing back a drug-resistant stomach bug. The bacteria caused several outbreaks in the United States in the past year, according to a new report from the Centers for Disease Control and Prevention.

The bacteria, called Shigella sonnei, can cause diarrhea, stomach cramps and fever and is typically treated with the antibiotic ciprofloxacin. But between May 2014 and February 2015, there were 243 cases of Shigella sonnei in 32 states, and the vast majority were resistant to ciprofloxacin, the report found.

Some of the largest outbreaks occurred in Massachusetts (45 cases), and Pennsylvania (18 cases). Among patients who gave information about whether they had traveled abroad, about half said they had, mostly to the Dominican Republic and India. There was also an outbreak of 95 cases in San Francisco that was not linked with international travel.

Some of the U.S. outbreaks occurred among children in child care facilities, homeless people and gay and bisexual men.

Shigella causes about half a million cases of diarrhea in the United States each year, and the disease can be spread from person to person, or through contaminated food or water, the CDC says. Patients usually get better in about a week without treatment, but antibiotics are often used because they can reduce the duration of symptoms and the time when a person is infectious. [6 Superbugs to Watch Out For]

The bacteria was already resistant to the antibiotics ampicillin and trimethoprim/sulfamethoxazole, but as the new report shows, resistance to the most effective drug, ciprofloxacin, is increasing.

"These outbreaks show a troubling trend in Shigella infections in the United States," Dr. Tom Frieden, director of the CDC, said in a statement. "Drug-resistant infectionsare harder to treat and because Shigella spreads so easily between people, the potential for more — and larger — outbreaks is a real concern."

International travelers can reduce their risk of getting Shigella or another types of diarrhea by washing hands frequently, eating only hot foods and drinking from sealed containers. Mild or moderate cases of traveler's diarrhea can be treated with over-the-counter medications such as Pepto-Bismol — antibiotics should be reserved for severe cases, the CDC says.

In addition to good hand hygiene, people who get sick with Shigella should avoid preparing foods for others and avoid swimming for a few weeks after they get better. Children with the condition should also not to go daycare or other group activities while they are sick, the CDC says. Among homeless populations, increasing access to toilets and soap for washing hands may prevent Shigella's spread.

The study is published this week in the CDC's Morbidity and Mortality Weekly Report.