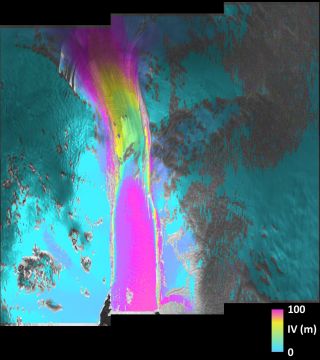 One of West Antarctica's largest glaciers surged a staggering 325 feet (about 100 meters) in less than two weeks this month, the European Space Agency reports.

Two radar images from the ESA's Sentinel-1A satellite on March 3 and March 15 reveal parts of the enormous Pine Island Glacier and its floating ice shelf making a swift trek toward the sea. The wild race to sea is typical for Pine Island Glacier, which flows up to 13,120 feet (4,000 m) every year.

"Pine Island is not speeding up," said Eric Rignot, an expert on Pine Island Glacier at the University of California, Irvine, and NASA's Jet Propulsion Laboratory in Pasadena, California.

However, Pine Island Glacier is one of the most rapidly changing features in West Antarctica. In recent decades, the colossal river of ice has sped up and grown markedly thinner. (As glaciers flow faster, they stretch out and thin.) [Photo Gallery: Antarctica's Pine Island Glacier Cracks]

The glacier's grounding line — the zone where the ice loses contact with the ground and floats into the ocean — has also receded by nearly 20 miles (up to 30 kilometers).

Studies suggest this rapid change is due to warm ocean currents melting the ice from below.