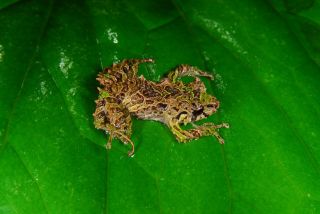 A fingernail-size frog that can morph its skin texture from spiny to smooth in just minutes is the first shape-shifting amphibian ever found, according to a new report.

The tiny "mutable rain frog" (Pristimantis mutabilis) was discovered on the western slopes of Ecuador's Andes Mountains, in a protected cloud forest reserve. The misty, fog-enshrouded Chocó cloud forest is a biodiversity hotspot, and the protected area, called Reserva Las Gralarias, is also home to several rare birds and butterflies. A new glass frog species, the Las Gralarias glass frog, was reported there in 2012.

Scientists from Cleveland's Case Western Reserve University and Cleveland Metroparks found the shape shifter during their annual survey of the reserve's amphibian population. For the past 10 years, Katherine Krynak, a biologist and Case Western graduate student, and Tim Krynak, a naturalist and Metroparks project manager, have walked the reserve trails together at night, listening for frog calls and scanning for rare species. [Photos: Cute and Colorful Frogs]

The Krynaks volunteer their time and also support the reserve with a private nonprofit foundation.

The pair first spotted the frog in 2006 and only snapped a photo, but later realized it could be a newfound species when they enlarged the image. They started calling the frog a "punk rocker" for its spiny-textured skin. "It wasn't until we saw the amazing texture of its skin that we thought, 'wow, this is something different,'" Katherine Krynak told Live Science.

A female mutable rain frog is just 0.8 to 0.9 inches (20 to 23 millimeters) long, and males are even smaller, the new study reports. The rain frogs are a species-rich group that skips the tadpole stage and develops into frogs directly within their eggs.

Lead study author Juan Guayasamín, a professor at the Universidad Tecnológica Indoamérica in Ecuador, first suggested the little frog could be a new species, Krynak said. In 2009, the Krynaks finally saw another punk rocker frog and grabbed it for a detailed photo session, putting it in a small plastic cup overnight.

But when Katherine Krynak opened the cup the next morning, the frog's spines were gone. Thinking she had nabbed the wrong frog, Krynak added moss to the cup to make the frog more comfortable until they could return it to the forest that night. "We were both so disappointed because it had taken years to find another one," she said.

But the Krynaks said they couldn't believe their eyes the next time they checked on the frog. Its spiny skin texture had returned. [In Photos: Animals That Mimic Plants]

Tim Krynak documented the transition with a series of photos on a smooth white board, showing the frog transform from prickly to smooth in about five minutes.

"It was remarkable," Katherine Krynak said. "We were both kind of in shock at this point."

The Krynaks think the shape-shifting spines may provide camouflage in the mossy forests, but the idea still needs to be tested. Researchers also don't yet know how the frog morphs its skin from smooth to spiny, and then back again.

However, Guayasamín has confirmed that P. mutabilis is a new and unique species through genetic tests and a description of the frog's body size, shape and color. Study co-author Carl Hutter, of the University of Kansas, also documented the frog's calls, identifying three songs that are different from other species.

During the study, Hutter also discovered a relative of the punk rocker rain frog that can also change its skin texture. This previously known species, called Primates sobetes, has similar markings but is twice as large as the newly found rain frog.

The shape-changing abilities of both frogs are reported today (March 24) in the Zoological Journal of the Linnean Society.

The two shape-shifting frogs are in different groups, which suggests that the trait evolved independently or is present in more species than has been previously recognized, Krynak said.

The discovery illustrates the importance of describing the behavior of new species, and bolsters the argument for preserving amphibian habitats, Katherine Krynak said. Amphibian populations are in decline around the world, and the Reserva Las Gralarias region is under threat from agriculture and cattle farming, she added.

"Amphibians are declining so rapidly that scientists are oftentimes describing new species from museum specimens because the animals have already gone extinct in the wild, and very recently," Katherine Krynak said.