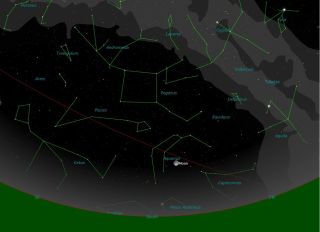 This is what the night sky would have looked like for someone standing in Leicester, England, at 9:50 p.m. on Aug. 25, 1485, with with a partial lunar eclipse.
(Image: © Colin Brooks)

In just a matter of days, Richard III will get a long-overdue royal burial in Leicester, England. The last time the king's body was laid to rest, more than 500 years ago, a "blood moon" might have shone over his naked, heavily wounded corpse, an astronomical simulation suggests.

Richard's two-year reign ended when he died on Aug. 22, 1485, during the Battle of Bosworth Field, the decisive fight in the Wars of the Roses, an English civil war. After the battle, Henry Tudor was established as the new English monarch, and Richard wasn't exactly given a ceremonious funeral.

Rather, historical sources indicate that Richard's gravely injured body was stripped naked and carried by horseback to Leicester to be put on a humiliating display for several days under the arches of the Church of the Annunciation. [Gallery: The Search for Richard III in Photos]

The exact location of Richard's grave was lost for centuries. When archaeologists found it in 2012, they discovered Richard's skeleton buried in a hastily dug grave under the floor of the ruins of a monastery known as Grey Friars in Leicester. He had no coffin and no shroud, and his hands may have been tied in front of him.

Looking for more insight on important moments in King Richard's life (and death), Colin Brooks, a member of the Leicester Astronomical Society and the chief photographer at the University of Leicester (the institution that has spearheaded the search for Richard's grave), turned to historical data from NASA on the position of the moon, planets and stars. Brooks found there was a partial lunar eclipse three days after Richard was killed, on Aug. 25, 1485.

"A lunar eclipse can be quite red depending on the amount of dust thats in the atmosphere," Brooks told Live Science. Sometimes this phenomenon is nicknamed a "blood moon."

Brooks said he didn't find any historical sources that mentioned a blood moon over Richard's body, but he thinks a partial lunar eclipse wouldn't have been as noticeable or ominous as a solar eclipse — like the one that darkened English skies on the day that Richard's wife, Anne Neville, died.

Scientists spent more than two years studying Richard's bones while controversy and legal battles brewed over how and where to reinter the remains. Beginning on Sunday (March 22), there will be a week of events and ceremonies leading up to Richard's final reburial in Leicester Cathedral.