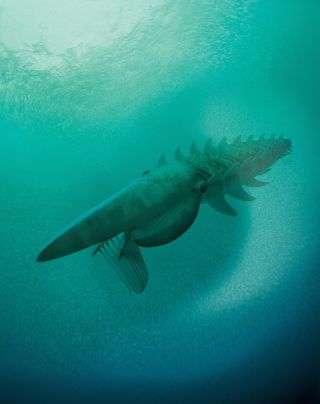 An illustration of the anomalocaridid (Aegirocassis benmoulae), a giant filter feeder that fed on plankton and lived in the Early Ordovician about 480 million years ago. The animal measured about 7 feet (2 meters) in length, and is one of the largest arthropods that ever lived.
(Image: © Marianne Collins, ArtofFact)

A 480-million-year-old fossil is giving paleontologists new insights into a sea monsterlike creature called an anomalocaridid, which is an ancestor of modern-day arthropods such as lobsters and scorpions, a new study finds.

The 7-foot-long (2 meters) fossil reveals that the extinct giant had two sets of legs, not one, as researchers previously thought. It also had a filter-feeding system that likely allowed it to consume plankton, the researchers found.

The researchers named the species Aegirocassis benmoulae after its discoverer, Mohamed Ben Moula, who found the fossil in southeastern Morocco in 2011. [See photos of anomalocaridid fossils and illustrations]

The fossil was "dirty and dusty" when the study's lead researcher, Peter Van Roy, a paleontologist at Yale University, got it into the lab. Van Roy was cleaning the specimen when he realized it had two sets of flaps on each body segment — indicating that the creature had two sets of legs.

"I was totally shocked" to see the two sets of legs, Van Roy told Live Science. "For a week on end, I actually went back to the specimen every day just to look at it again, to make sure that I wasn't seeing things."

The fossil has helped researchers place the anomalocaridid within the arthropod family tree because it gives researchers an unfettered view of the beast, whose anatomy has stumped paleontologists for ages, he said.

Researchers first identified anomalocaridid fossils in the 19th century, but the creature is so odd-looking — with a whalelike head, bristly appendages and a segmented body covered in flaps — that some people thought the fossilized body parts belonged to several different animals, instead of just one, Van Roy said.

Researchers finally pieced the animal together in a 1985 study published in the journal Philosophical Transactions B. But parts of its anatomy remained a mystery.

"Anomalocaridids seemed to lack front limbs," Van Roy said. "Being an arthropod — being a joint-legged animal — and not having legs, it's kind of embarrassing."

The new fossil helps show that anomalocaridids had two separate sets of flaps per body segment, the researchers said. The upper flap is analogous to the upper limb of modern arthropods, and the lower flaps resembled modified legs that were adapted for swimming. [Cambrian Creatures: Photos of Primitive Sea Life]

"We didn’t know these animals had two sets of flaps (an upper one and a lower one) because the fossils we had were all so flattened," said Greg Edgecombe, a researcher at the Natural History Museum in London, who was not involved in the study.

Van Roy and his colleagues looked back at older anomalocaridid fossils and found they did have the upper and lower flaps seen in the new fossil — showing that researchers had overlooked these limbs in the past.

The A. benmoulae fossil also shows that the animal was a filter feeder, an animal that strains plankton and other food from the water, much like a modern baleen whale or sponge. Other anomalocaridids from earlier eras were predators that caught prey with their spiny head limbs, the researchers said.

The animal's great size suggests that the oceans had ample plankton during that time, Van Roy said.

The findings are "fantastic," said Javier Ortega-Hernandez, a research fellow in paleobiology at the University of Cambridge in the United Kingdom, who was not involved with the study.

"A little over a decade ago, it would have been nearly laughable to think that almost 500-million-year-old arthropods could have reached more than 2 meters in size, and had an ecology similar to that of modern whales," Ortega-Hernandez wrote in an email. "Fortunately, we now have the fossils, and they almost speak for themselves."

The study was published online today (March 11) in the journal Nature.