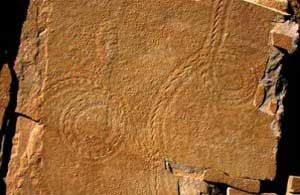 Hermit crabs, a lineage some 200 million years old, may not have been the first to salvage mollusk shells for self-protection. Primitive arthropods were among the earliest animals to venture onto land—500 million years ago—and they too recycled shells, according to new research.

James W. Hagadorn of Amherst College in Massachusetts and Adolf Seilacher of Yale University analyzed Cambrian-period fossil tracks left on a sand flat by ancient arthropods in what is now central Wisconsin. The small imprints are in remarkably good shape: a microbial mat permeating the beach probably saved them from obliteration by waves.

The tracks resemble those of present-day hermit crabs, complete with intermittent, off-center impressions—hallmarks of a borrowed shell touching the ground with each step. But the marks suggest that compared with hermit crabs, the ancient trekkers wore their shells upside down. So whereas hermit crabs' rear ends curl under toward their bellies, the early arthropods’ tails must have curled upward, like scorpions'.

Also in contrast with hermit crabs, the borrowed shells seem to have been too small to cover all. They may have just protected the gills from desiccation, thus overcoming a critical hurdle in the move from sea to land.

After all, guarding against land predators was pointless: there were none. Indeed, the winding tracks suggest a leisurely excursion. The arthropods probably came ashore at low tide to graze upon the same microbial mat that recorded their tracks so well.

The finding was detailed in the journal Geology.