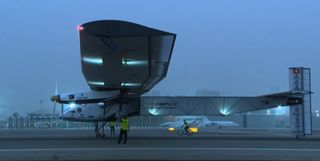 A solar-powered plane, dubbed Solar Impulse 2, took flight today (March 8), embarking on the historic first leg of a planned journey around the world.

The aircraft, which can fly without using any fuel, took off from Al Bateen Executive Airport in Abu Dhabi, capital of the United Arab Emirates, shortly after 11:10 p.m. EDT (7:10 a.m. local time on March 9). The plane will now fly roughly 250 miles (400 kilometers) in 12 hours to reach Oman, officials said.

Next, Solar Impulse 2 will make stops in India, Myanmar and China, before crossing the Pacific Ocean. The plane is then expected to fly across the continental United States, touching down in three cities along the way. After journeying across the Atlantic Ocean, the plane will make a stopover either in southern Europe or North Africa before returning to Abu Dhabi, according to company officials. [See photos of Solar Impulse 2's historic flight]

If successful, Solar Impulse 2 will become the first solar-powered aircraft to circumnavigate the globe. Swiss pilots and Solar Impulse co-founders André Borschberg and Bertrand Piccard have said the round-the-world flight will likely end in late July or early August.

"We are very ambitious in our goal, but modest given the magnitude of the challenge," Borschberg and Piccard said in a statement. "This is an attempt, and only time will tell if we can overcome the numerous weather, technical, human and administrative issues."

Borschberg was at the controls when Solar Impulse 2 took off from Abu Dhabi, but he and Piccard will alternate flying the solar-powered plane on each leg of the round-the-world trip.

Solar Impulse 2 is designed to fly day and night without using a single drop of fuel. The plane is powered entirely by solar panels and onboard batteries, which charge during the day to enable the ultra-lightweight plane to continue its journey throughout the night.

The plane has a wingspan of 236 feet (72 meters), and it weighs only 5,070 pounds (2,300 kilograms), or about the same as a car, company officials have said. The aircraft's wings are covered with 17,000 solar cells that power the plane's onboard systems.

The round-the-world flight is designed to demonstrate the possibilities of "green" technology and sustainable energy.

In 2013, Borschberg and Piccard completed an unprecedented coast-to-coast-flight across the United States, using a first-generation prototype of the Solar Impulse plane. The first-of-its-kind flight took two months, and included five stops between California and New York.

Since that cross-country flight, the Solar Impulse team has made several upgrades to the aircraft to prepare for the current round-the-world journey. Engineers made Solar Impulse 2 more energy efficient by improving the quality of the aircraft's batteries and using lighter materials to construct the plane. The aircraft's cockpit was also upgraded to include more space and better ergonomic designs, which will help Borschberg and Piccard remain as comfortable as possible during long flights, according to company officials.

Each leg of the round-the-world journey will be broadcast live on the Solar Impulse 2 website.