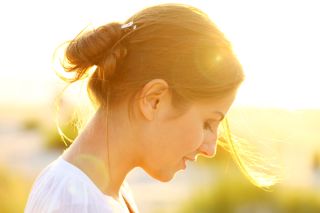 Ultraviolet rays can continue to harm skin even in the dark, inflicting cancer-causing DNA damage hours after people have left the sunshine or tanning bed, researchers say.

In experiments on skin cells from mice and humans, the researchers found that the cells experienced a certain type of DNA damage not only immediately after exposure to ultraviolet A rays, but for hours after the UVA lamps were turned off.  UVA rays make up about 95 percent of the ultraviolet radiation that penetrates Earth's atmosphere.

"The idea of damage occurring to DNA for hours after exposure to UV rays was an urban legend in the field of DNA damage and repair — people saw it occasionally, but no one could reproduce it, so they gave up on it," study co-author Douglas Brash, a biophysicist at the Yale University School of Medicine, told Live Science.

The researchers knew that damage to DNA usually starts accumulating less than a second after ultraviolet rays strike the skin. But the new findings show that much of the damage from ultraviolet radiation occurs at least three hours after exposure to ultraviolet A.

To the researchers' surprise, they found that the reason for this continuing damage is that melanin — the pigment that gives skin and hair their color, and is usually thought of as a protective molecule because it blocks the ultraviolet rays that damage DNA — can itself cause damage to DNA. [7 Beauty Trends that Are Bad for Your Health]

Such DNA damage is a major cause of skin cancer, the most common form of cancer in the United States.

In the researchers' experiments with melanocytes, the cells that produce melanin, they illuminated mouse and human melanocytes with UVA lamps. This led to a type of DNA damage known as a cyclobutane dimer, which creates bends in DNA strands that prevent the information they contain from being read correctly.

In the experiments, cells that lacked melanin experienced this type of DNA damage only during their exposure to UVA rays.

This new finding reveals that melanin can both help prevent and cause cancer, supporting a few past studies suggesting that melanin is associated with skin cell damage. "It is doing both good and bad things," Brash said in a statement.

The researchers discovered the reason melanin can have damaging effects is because ultraviolet light can generate molecules that energize an electron in melanin. This energy then gets transferred to the DNA, damaging it.

"This is like the chemistry seen in fireflies — it's not that the skin is glowing, but it's the same in the sense that chemistry is exciting electrons," Brash said. "This is not something that's been seen in mammals before."

The scientists noted that since this energy transfer is relatively slow it might allow a window of opportunity for compounds to be used to intervene, and prevent the damage from happening. "A protective strategy might involve finding small molecules that can enter the skin and keep energy from going into DNA, instead dissipating it away as heat," Brash said.

The result could be an "evening-after" sunscreen that could block this damage from occurring in the dark. Potential ingredients for such a sunscreen might include vitamin E or chemicals similar to the widely used food preservative potassium sorbate, the researchers said.

The scientists detailed their findings in the Feb. 20 issue of the journal Science.