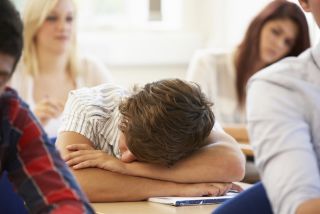 The amount of time that teens spend sleeping has substantially declined over the last 20 years, a new study suggests.

The results from a large national survey show that the percentage of U.S. teenagers who regularly get seven or more hours of shut-eye is consistently decreasing.

The researchers also found that girls in this age group are less likely than boys to report regularly getting seven or more hours of sleep a day. Other groups who also frequently sleep less than seven hours include minority adolescents, teens living in urban areas and those [1] teens whose families have lower levels of income, according to the study.

"We found that a majority of adolescents after age 15 are not even meeting minimum requirements for adequate sleep," said study researcher Katherine M. Keyes, an assistant professor of epidemiology at the Mailman School of Public Health at Columbia University in New York. These results suggest that messages about appropriate sleep may not be reaching teens, she said.

To function at their best, teens should hit the sack for eight to 10 hours a night, the National Sleep Foundation recommends.

Getting enough sleep is important for teens' bodies and minds during this critical stage in their growth and development. Those who skimp on shut-eye during their teen years could also set the stage for a lifelong pattern of getting too little sleep as adults. [5 Things You Must Know About Sleep]

A lack of Zzzs could also affect adolescent health in a variety of other ways. Previous research has suggested that the average American teen is chronically sleep deprived, and this may increase teenagers' risk for experiencing problems in school performance, mental health issues, automobile accidents, substance use and even weight gain, the researchers wrote in their study, published online today (Feb. 16) in the journal Pediatrics.

In the new study, the researchers looked at data collected between 1991 and 2012 from a nationwide survey of more than 272,000 U.S. teens ages 12 to 19. The teens completed questionnaires while they were in the 8th, 10th and 12th grades asking them how often they get seven or more hours of sleep a day, and how often they get less sleep than they should.

The results from the new study indicate that teens who are getting the least amount of sleep are the ones most at risk of adverse health outcomes, Keyes said.

Although this analysis did not examine the reasons why teens are getting less sleep than needed, other studies have speculated that greater use of the Internet and social media, as well as increased pressure to get into college may be partly to blame.

But interestingly, the new study found that the most substantial decreases in the amount of sleep teens get took place during the 1990s, which was a pre-Facebook, pre-iPhone era, Keyes said.

Being tired as a teenager may seem like the norm for this age group. The start of puberty can reset teens' internal clocks by up to two hours, making it harder for them to nod off until later at night, especially as the demands of school, part-time jobs, extracurricular activities, families and friends all compete for their time.

Given all that teens are attempting to pack into their days, sleep may seem like a low priority. In addition, teens may be unaware — or unwilling to admit — that insufficient shut-eye is truly influencing their moods and behaviors.

The biggest take-home message of this research is that teens need to know what is an adequate amount of sleep, and be aware of the importance of getting enough sleep in for daily functioning and performance, Keyes said.

"Educators, parents and public-health practitioners need to work together to ensure that sleep as a public-health issue gains attention and awareness," she said.