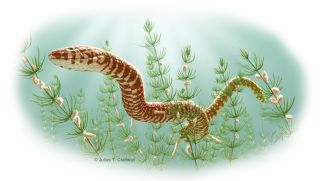 This image shows an artist’s depiction of Parviraptor estesi, a snake that lived during the Upper Jurassic or Lower Cretaceous periods, swimming in a freshwater lake with snails and algae. The fossil of this snake was found in Purbeck Limestone, in Swanage, England.
(Image: © Julius Csotonyi)

New fossils that may be the oldest known remains of snakes are helping researchers to better understand how the slithering beasts evolved, according to a new study.

The new fossils challenge previous theories that suggested that the long, thin skull structure that is characteristic of snakes is a feature that evolved after the animals became legless and developed their elongated bodies.

In contrast, the new study suggests that "the skull evolved first, and the legless thing followed," said study author Michael Caldwell, a professor and chair in the department of biological sciences at the University of Alberta in Canada.

Caldwell identified the first of the four ancient snake species by chance, when he opened a drawer at the Natural History Museum in London in 2004. Right there, he found the remains of an ancient animal that had been described in the 1990s as a type of lizard. However, upon examining the animal's maxilla — the bone in the face that bears the teeth — he realized that he was looking at a snake.

"When I looked at this specimen … with my snake-comparative-anatomy hat on, it was really very, very obvious that it was a snake maxilla," Caldwell told Live Science. [7 Shocking Snake Stories]

That specimen was the 143-million-year-old Parviraptor estesi, the youngest of the four snake species described in the new study. Caldwell also discovered the three other snake species outlined in the paper, from specimens that had been previously misidentified as lizards.

The remains of the newly described snake species are only fragmentary, and so not much is known about the animals' overall shape, length or body form. However, when it comes to their skull anatomy and their sharp, backward-pointing teeth, these ancient snakes have a lot in common with snakes that exist today, the researchers said.

The remains seem to be most similar to modern snakes that belong to rather obscure groups, and are thought to be somewhat primitive members of the snake family, such as a group called the anilioids, which are found in Southern Central America, or the genus Cylindrophis in Southeast Asia, Caldwell said.

The snakes in these groups "are still very much snakes, there is no question about the affinity of these living forms, but they don't show quite the mobility of the skull that you would see in a boa or a python," Caldwell said.

Caldwell stressed that it is likely that even older snake fossils exist, but they have not been identified yet. "If we have got them at 167 million years old, it means that the group had evolved and radiated long before that," he said.

"What we are missing right now is either the material from that point in time, or the rocks to go find them in," he said.

The new study was published today (Jan. 27) in the journal Nature Communications.