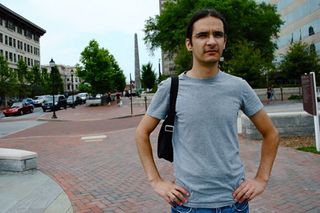 This ScienceLives article was provided to Live Science's Expert Voices: Op-Ed & Insights in partnership with the National Science Foundation.

The fascinating and mysterious images of marine life in the ocean depths depicted in the documentary films of Jacque Cousteau inspired Ioannis Sgouralis to study the life sciences, and from there, human physiology. As a postdoctoral fellow at the National Institute for Mathematical and Biological Synthesis, Sgouralis creates computer models of the kidney to assess the organ’s behavior under a range of conditions. The models can help researchers better understand how severe illnesses such as hypertension or diabetes progress and thereby help develop more effective prevention and treatment strategies.

The National Science Foundation: What is your field and why does it inspire you?

Ioannis Sgouralis: My expertise is in mathematical biology , which is part of the broader area of applied mathematics. In particular, I use mathematics to answer questions that arise in the branch of physiology. Most of my work deals with the development and analysis of computational models of processes that are only theoretically tractable since experimental and clinical limitations render them inaccessible otherwise. [Math Models Predict Climate Change Effects ]

I.S.: Currently, I am developing a mathematical model of the kidney. The goal of the project is to represent the fundamental processes carried out by the kidney and use this knowledge to assess the organ's behavior under a range of physiologic and pathophysiologic conditions. With the resulting model I hope to shed some light on the progressive stages of severe illnesses like hypertension or diabetes that are related to kidney malfunction.

NSF: How does your work benefit society?

I.S.: A significant part of my work deals with the development of computational models. Such models can be used to test hypotheses and proposed practices without having to perform expensive, time consuming and often impossible experiments. The analysis of the models can reveal mechanisms that result in lack of physiologic control and eventually development of diseases. A good understanding of the properties of those mechanisms can help toward the development of efficient prevention and treatment strategies. To that end, my work has the potential of influencing clinical practice.

NSF: What do you like best about your work?

I.S.: Two characteristics that I enjoy most are, first, the chance to solve problems that have the potential of improving everyday life, and second, the specific methods involved. Mathematical modeling demands interdisciplinary thinking and collaboration with scientists from diverse backgrounds, such as physiologists, clinicians, computer scientists, physicists, and engineers.

NSF: What would your Tweet say about your work?

I.S.: My tweets would probably not be very exciting, as they would say something like, "Need data concerning kidney's response to…" or "Looking for the best way to model the effect of…”

NSF: What is the best professional advice you ever received?

I.S.: When I was an undergraduate, a professor once said to me, "A scientist needs to know the limits of the methods he makes use of. Often, it is more important to know when he cannot apply a method rather than when he can." I have considered this advice several times in my career so far.

NSF: What is the most surprising aspect of your work?

I.S.: I believe surprise is the very essence of using mathematics to track biological questions. A common belief is that areas so different, by definition only, like math and bio have nothing in common. However, modern scientific practice exposes vast overlapping, where methods of one field are applied to seek solutions to problems of the other.

NSF: What exciting developments lie in the future for your field?

I.S.: So far we have been able to build models of several individual organs that form the body of mammals. As the number of the available models increases, it is possible that in the future we will be able to combine them into a single model that will represent the whole body. Such a model could be used to simulate human physiology in its most general setting. Given this possibility, the number of questions about human health and disease that could be addressed is unlimited.

NSF: Who is your number one hero and why?

I.S.: My number one hero is, undoubtedly, the marine explorer Jacques Cousteau. When I was young, I was excited about Cousteau's documentaries of marine life, which I used to watch passionately. Those films, full of oceanic images and Cousteau's inspiring personality, decisively influenced me to get involved in the life sciences.

NSF: What do you do when you’re not in the lab or out in the field?

I.S.: In my free time I enjoy reading literature, mostly novels. My reading spans a wide range of literature, from classic to modern, with the most recent ones centering on science and crime fiction. Among my favorite authors are Jules Verne, Arthur Clarke, and William Faulkner.

Follow all of the Expert Voices issues and debates — and become part of the discussion — on Facebook, Twitter and Google+. See the ScienceLives archive. The views expressed are those of the author and do not necessarily reflect the views of the publisher. This version of the article was originally published on Live Science.