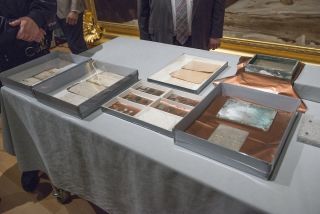 In 1795, then-Massachusetts Gov. Samuel Adams, famed patriot Paul Revere and Col. William Scollay buried a time capsule under the Massachusetts State House cornerstone in Boston, and now, after more than 200 years, its contents have been revealed.

On Jan. 6, officials from the commonwealth of Massachusetts and the Museum of Fine Arts (MFA) in Boston carefully excavated and opened the capsule.

The time capsule holds silver and copper coins dating from 1652 to 1855 (the capsule was opened in the decades following its burial in 1795) and a silver plaque that experts believe Paul Revere himself engraved. The capsule also contained a copper medal depicting George Washington, several newspapers, an impression of the seal of the commonwealth and the title page from the Massachusetts Colony Records. [See photos of the time capsule and its contents]

The time capsule was last opened in 1855, when its contents were documented and cleaned, and additional items were reburied with it. The commonwealth has a set of historical records that mention the time capsule, but its existence wasn't confirmed until summer 2014, when an engineering firm stumbled upon the capsule during a construction project at the statehouse. Engineers discovered the capsule while using ground radar to survey the area.

In 1855, the capsule was mortared into the bottom of a granite cornerstone. In September 2014, museum workers and engineers began planning how to safely remove the artifacts.

On Dec. 11, a team of excavators, led by MFA conservator Pam Hatchfield, spent 7 hours chipping away at the cornerstone with chisels, hammers and specialized drills to carefully dig out the time capsule. But before the team could break through to the capsule, they discovered five 19th century silver coins that were ceremoniously set in plaster around the capsule when it was reburied. The excavators then reached the 10-lb. (4.5 kilograms) brass container and carefully removed it.

The capsule was taken to the MFA, where experts began the delicate task of opening it. An initial X-ray scan revealed the outlines of the plaque, several of the coins and several sheets of newspaper.

Conservators and engineers then removed excess plaster that was clinging to the brass case, and cleaned up the corrosion around the edges and the screws that had been keeping the capsule locked shut.

The time capsule's contents were revealed on Jan. 6 in a ceremonial opening that was attended by Massachusetts Gov. Deval Patrick, Secretary of the Commonwealth William Galvin and MFA Director Malcolm Rogers. The capsule and its contents will be on display briefly at the MFA before being reburied at the Massachusetts State House.