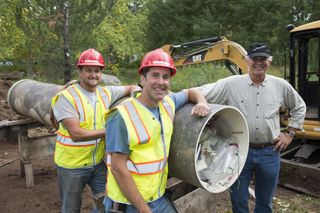 A time capsule containing a mouse from an Apple Lisa computer that was buried in 1983 and then forgotten has been unearthed near Aspen, Colo.

The capsule was uncovered by members of National Geographic Channel's Diggers team who worked closely with one of the former design-team members who buried the capsule, Harry Teague.

"When we buried the capsule in 1983 at the IDCA conference titled 'The Future Is Not What It Used to Be,' it was scheduled to be unearthed in twenty years. We had no idea it would be thirty before we would finally get around to digging it up," said Harry Teague, part of the Diggers' team, in a statement. "I'm sure it's loaded with things of cultural and historic import, but the mouse from one of his new Apple Lisa computers that Steve Jobs threw in at the last minute has to be one of the more iconic items." [Photo-Art Time Capsule Will Live As Long As Earth]

The team used the original survey and some math to figure out the capsule's location. The capsule was then excavated with the help of an archaeologist, and after researchers catalogue the contents, they will make their way to the Aspen Historical Society.

The Apple Lisa was Jobs' first mainstream computer targeted for individual business users. The mouse was buried along with some iconic emblems of the 80s, such as an eight-track of the Moody Blues, a Rubik's Cube and a Sears, Roebuck & Company catalog, along with objects that might be a bit more timeless, such a copy of Vogue magazine and a six-pack of beer.

The show "Diggers" follows the exploits of Tim Saylor and George Wyant as they search for lost heirlooms, Civil War trinkets and other forgotten pieces of American history. An episode about the time capsule will air on the program in early 2014.