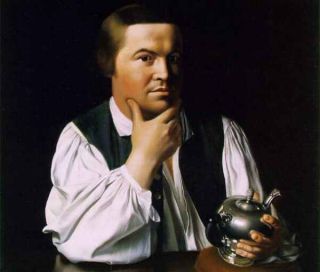 This account, which she seemed to present as a sort of argument against gun control, clashes with the version most of us know — the one where Revere warned the Americans about the British (not the other way around) by riding to Lexington to notify patriot soldiers that the Red Coats were headed their way.

In follow-up interviews, Palin has refused to admit that she is in any way off the mark with her version of history. So, did she get the details of Revere's ride wrong?

Yes, for the most part. The Paul Revere House, a historical museum in Boston, officially summarizes the revolutionary ride thusly: "On the evening of April 18, 1775, Paul Revere was sent for by Dr. Joseph Warren and instructed to ride to Lexington, Massachusetts, to warn Samuel Adams and John Hancock that British troops were marching to arrest them … On the way to Lexington, Revere 'alarmed' the country-side, stopping at each house, and arrived in Lexington about midnight." [Read: How Do Other Countries Celebrate Their Independence?]

It's a different picture than the one Palin painted. However, historian Nina Zannieri, the director of the Paul Revere House, told us that there are grains of truth dispersed here and there in the former Alaskan governor's account, which she may have picked up during her recent visit to Boston's Old North Church.

Regarding Palin's comments about Revere warning the British, Zannieri said she may have been recalling an event that happened later in the night, well after Revere's midnight ride. "Revere was actually stopped and his horse was taken away and he was questioned by British soldiers," Zannieri told Life's Little Mysteries, a sister site of LiveScience. "In that instance he told them that there were a lot of [patriot soldiers] waiting for them. Some people would say this was a threat or a warning."

Furthermore, Palin's comment about ringing bells during the ride might be a distortion of the fact that he was a bell ringer at Old North Church as a youth. "In some communities, bells were used to call an alarm, though not in [Boston]," Zannieri said. "In this instance, of course, Revere's ride was done at night and quietly so that it wouldn't be noticed. But by the time the militiamen were assembled on the Lexington Green" — i.e. the next morning — "it's possible bells might have been ringing."

Palin's distortions of the facts probably aren't so unusual, Zannieri pointed out. "One thing I can say is that the whole midnight ride story is gotten wrong very often. People mistake events from Henry Longfellow's famous poem with what actually happened that night."

"It's easy for a non-historian to get history a little bit wrong," she continued, "and it seems like a lot of media attention for something that is probably not high on the Richter scale of importance."

This story was provided by Life's Little Mysteries, a sister site of LiveScience. Follow Natalie Wolchover on Twitter @nattyover