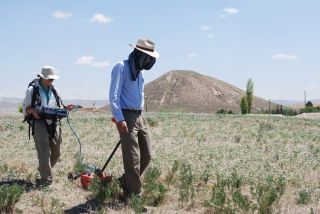 Walking along the scrubby countryside of central Turkey, Compton Tucker — bandana draped over his head and under his straw hat — looks like he's hauling a pushmower back to a tool shed.

But the boxy equipment that he's dragging isn't cutting down weeds, it's actually a kind of radar that can see underground. Like a beachcomber with a metal detector, Tucker and colleagues walk up to 10 miles (16 kilometers) a day, seven days a week, across sweltering ancient Turkish archaeological grounds in search of bone fragments, pottery and tombs.

Tucker, an earth scientist with NASA's Goddard Space Flight Center in Greenbelt, Md., and Joe Nigro, a geographic information systems (GIS) specialist and archaeologist working at Goddard through Science Systems and Application Inc., are combining NASA satellite data and ground-penetrating radar (GPR) technology to map and protect the famed spot where Alexander the Great cut fabled King Midas' Gordian knot. As legend has it, Midas dedicated the oxcart of his peasant-turned-king father, Gordius, to the gods by tying it up with an intricate knot. When Alexander arrived, he tried and failed to untie the knot and remove the symbolic cart, so he sliced through it with his sword. (A Gordian knot has since become a metaphor for solving a seemingly unsolvable problem with a bold stroke.)

In the past, NASA radar has been used on satellites and spacecrafts to detect ice deposits and to explore deep canyons on the moon's surface. On Earth, GPR has been used to survey Civil War cemeteries and battlefields.The radar works by bouncing pulses of microwave energy off buried objects to create a subterranean snapshot.

"We don't want to be limited by our eyes, so we use electromagnetic spectrum radar to look beneath the surface," Tucker said.

Archaeology is hard work, not to mention expensive, so an entire site is rarely excavated, said Philip Mink II, an archaeologist from the University of Kentucky, who was not involved with the mission.

"GPR and other geophysical techniques allow us to collect data on parts of the site we might otherwise not be able to investigate," Mink said. "These investigations may locate archaeological features such as houses, tombs, burials, trash and storage pits, and ceramic firing areas that can be targeted for excavation given the limited money and time field archaeologists often face."

A refined search will prevent trampling of burial sites, as well as dissuade the scourge of the archaeologist — looters.

"One of the reasons we do the work, and are very passionate about it, is that we feel like what we're doing is fighting against looters and plunderers who would find the more valuable things, trash everything else, and send them to Switzerland where anyone can buy them," Tucker said.

"The context of how these objects were buried is completely lost, and instead they just become some sort of trophy on someone's mantle," Tucker added.

Both Tucker and Nigro anticipate the techniques developed by the mission will be applicable to many other culturally sensitive archaeological sites, such as the Hasanlu site in Iran and Tikal in Guatemala.