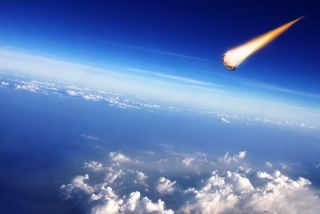 The findings could help identify smaller near-Earth objects — like the Chelyabinsk meteor that exploded over Russia in 2013 — before they blast through Earth's atmosphere, study co-author Hanying Wei, a researcher in earth, planetary and space sciences at the University of California at Los Angeles (UCLA), said here at the 47th annual meeting of the American Geophysical Union.

Smaller space rocks pose dangers because the vast majority lurk hidden in the solar system. Even if they're heading straight for Earth, "you will never see it in a telescope," Wei told Live Science. [Crash! 10 Biggest Impact Craters on Earth]

A cocoon of smaller space rocks and ultrafine dust often trails the massive near-Earth objects that circle the sun. Even if the main asteroid never comes close to the planet, Earth's gravitational pull can peel the smaller orbitals off and bring them hurtling directly toward the planet.

These smaller impacts won't destroy the Earth, but they batter the planet every few decades and can still be incredibly damaging, said study co-author Hairong Lai, a space physicist at UCLA. The 2013 Chelyabinsk meteor impact injured 500 people and caused significant property damage. A 50-foot-wide (15 meters) meteor that blasted into the ground near Carancas, Peru, in 2007 caused arsenic poisoning in the local population when the hot surface of the meteorite vaporized a tainted underground water supply.

Yet, astronomers have identified just 1 percent of these space rocks lurking in the solar system; the objects are usually less than tens of meters wide, Lai said.

When meteoroids randomly collide with the medium-size rocky bodies in the dust cloud around an asteroid, even tiny particles can pulverize the much larger objects, creating an ultrafine haze of dust. So the researchers wondered whether the presence of this fine dust, a byproduct of these catastrophic collisions, could help identify asteroids with large amounts of debris as well as the smaller near-Earth objects trailing them.

Photons ping the surface of the fine dust particles, knocking off electrons and leaving the dust positively charged, Wei said. As a result, the stream of particles spewing from the sun, called solar wind, interacts with the charged dust and creates a spike in the magnetic field. It turns out that several spacecraft in the solar system have onboard magnetometers that can detect these magnetic signatures of collision.

By using data from multiple spacecraft on the size and scale of the magnetic field perturbations, along with previously derived data on the speed and characteristics of known interstellar bodies, the team can calculate the size and shape of a trailing debris cloud. Because these asteroids circle the sun year after year, the researchers can map how the debris trail changes over time. From there, existing simulations can reveal whether Earth is in the path of rocky debris, Lai told Live Science.

The new method could eventually help scientists determine where to point their high-powered optics to identify potential dangers to Earth, Wei said. But there are a few limitations; currently, the researchers can only identify objects that are downstream from the sun, in the path of the solar wind.

And the scientists are not sure how long the signal from these collisions in space lasts; after a while, the dust cloud could accelerate to the same speed as the solar wind, thus leaving no trace in the magnetic field, Wei said.