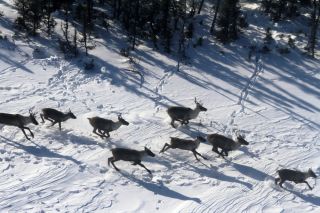 Caribou, the wild cousins of reindeer, appear to "fly" as they run across frozen lakes in Canada.
(Image: © © Susan Morse)

Reindeer are an enduring and beloved Christmas icon. However, Dasher and Dancer only slightly resemble their wild cousins — strong and graceful caribou. If you let your imagination run wild, you might be forgiven for thinking that reindeer — or caribou, as they're called in North America — seem to fly as they run across frozen lakes.

The holiday season offers one of the few opportunities for people to make a quick connection between the celebrated reindeer of song and story, and their real-world equivalent in the wild. As a conservation biologist, I have had the special privilege of witnessing their movements across boreal forest expanses during my winter survey research.

I was trained as a carnivore biologist, and my experiences in the northern boreal forests of Ontario began more than 10 years ago in work focused on finding wolverine tracks in the snow. During those searches, I would often encounter caribou, or their tracks, in the same remote areas. Both caribou and wolverines are species that require large, wild areas and have relatively low tolerance to land clearing, roads and habitat fragmentation.

Over time, I have become increasingly engaged in caribou research and conservation . This research has become especially urgent in the context of society's increasing appetite for natural resources and subsequent expansion into previously wild areas. In addition to having less space, majestic animals like caribou must adapt to a changing climate and the consequences of unpredictable weather patterns. Offering an extreme example of the consequences of intensive habitat change, several caribou populations in the Rocky Mountains of British Columbia and Alberta have disappeared — or number fewer than 10 individuals — as a result of habitat destruction, and leases are still being granted for energy development within the best habitats that remain.

Three Christmases ago, I authored an op-ed on caribou published in The New York Times. In the piece, I cautioned that caribou populations in Canada were declining after having vanished from at least 40 percent of their southern range across the country during the last century. I explained that, caribou faced significant threats to their future, and three years later, there is a heightened sense of urgency. While I thought my characterization of the challenges facing caribou was forceful in 2011, in re-reading my words today, they feel understated.

What has changed in this short time? As a member of the Committee on the Status of Endangered Wildlife in Canada — an independent committee of wildlife experts established under the federal Species at Risk Act to provide the government with scientific assessments wildlife risk of extinction — I have led or been involved in the scientific assessments of 11 caribou population groups across Canada, from Newfoundland to the western mountains to the Arctic.

In many places with good survey information, there is evidence of bad news. Very few of the areas where caribou roam show signs of recovery following population declines. As someone who looks forward to witnessing the majestic movements of caribou every year, the collective picture that continues to emerge regarding their long-term survival is both distressing and discouraging.

Despite what caribou are up against, a growing body of evidence and experience offers options to provide caribou with more meaningful protection than they currently receive. The question is whether there will be sufficient courage to restrain our galloping human footprint and whether we have the patience to undertake the habitat restoration that is necessary.

If this effort is to succeed, it will take decades. But any hope of progress must begin with a clear awareness of the threats caribou face in North America's boreal forests and elsewhere across Canada and Alaska. There are major choices to be made to help ensure that this holiday icon will endure in the wild and continue to spark the imaginations of youngsters dreaming of a reindeer-driven sleigh for generations to come.