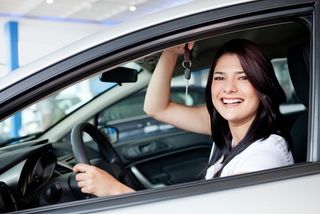 I was recently in San Diego with my daughter, and we used car-sharing services to get almost everywhere. She typed something into her phone, and a car was there in minutes. I'm partial to bike-sharing as a pollution-free way to get around a city, but I was amazed at how fast, efficient and hassle-free car-sharing was.

Sharing is one of those invaluable childhood lessons that tend to fall by the wayside as we grow older. But sharing seems to be making a comeback, and not just as an altruistic social nicety — it's a savvy financial strategy, too. The rise of the sharing economy — in which an individual rents out something she isn't using to another individual, typically through a website or an app — suggests that sharing makes economic sense. Sharing reduces the cost and obligations of ownership, and saves time and money for consumers. Sharing also makes tremendous sense for the environment, as a powerful tool for reducing waste, conserving resources and even cutting global warming pollution. [Benchmarking Carbon Pollution From 100 Top Power Producers (Op-Ed )]

Car and bike shares are the most obvious case-in-point. Car-sharing services, powered by mobile technology, are growing by leaps and bounds, seamlessly connecting passengers with rides. In many parts of the country, especially where public transportation service is poor, people need a car to get from A to B — sharing a car, or a ride, provides a more affordable option. (I have a colleague in California who's made $1,500 this year sharing her car on Getaround.)

Sharing a car is a cleaner option, too. Researchers recently calculated that if New Yorkers traveling to nearby destinations were willing to share a cab, the city could reduce the size of its fleet by 40 percent, reducing traffic snarls and pollution. The percentage of New Yorkers actually willing to share a cab is somewhat less clear; in San Francisco, however, the smartphone-driven taxi companies Uber and Lyft recently launched ridesharing options, UberPool and Lyft Line, which allow passengers to link up and share rides for half the price.

When I was a student, I did the low-tech version of ridesharing. At the airport, I would walk down the line and see if anyone was going to my neighborhood, and if they'd be willing to share a cab. I often found a ride this way, and because I was clearly on a student budget, the other person usually offered to pick up the tab.

Making car-sharing and bike-sharing more widely available allows people to choose how they want to move around, making it easier to go car-free, or car-lite, and greatly reduce carbon footprints. In Helsinki, the Finns are working to create a software-driven mobility system — including bikes, cars, minibuses and ferries — that is so flexible and convenient people won't even want a private car.

Food, you could argue, is meant for sharing — yet 40 percent of the food produced in this country goes to waste, at home, in restaurants, at grocery stores, even on farms. Food waste is a waste of resources all around: food, money, energy, materials and water. It's a considerable source of global warming pollution, as well. Food in landfills produces 25 percent of U.S. methane emissions. Methane is a far more potent greenhouse gas than carbon dioxide, and the planet's second largest source of global warming pollution.

Several apps, such as CropMobster, Zero Percent and PareUp, have recently arrived on the scene to help link food producers who have excess supply to people and organizations looking for food, discounted or donated. They'll even help someone with a bunch of apple trees in their yard share with a group of gleaners who will come and pick the fruit. For the truly committed, there's Leftover Swap. This food-sharing app allows you to post a picture of your leftovers and share with someone nearby who finds them appetizing. Perhaps that extra pizza left over from the party doesn't need to go in the trash after all.

Solar energy is also stepping into the sharing arena. Solar sharing, or community solar, is a creative way to finance solar projects and get more people a piece of the solar pie. Several companies are working on variations of this model, which essentially allows an individual to buy solar panels installed in another location — a large solar farm, or a smaller, neighborhood-based array, instead of on your own roof — and use that energy to offset his or her electric bill. Just as a community might share water from a well, a solar collective would allow everyone to dip into the sun's energy.

Above all, sharing is an efficient way to make use of global resources. If a car is sitting empty in a garage for 23 hours a day, is that an efficient use of a vehicle? Or of the space used to park it? Does it make sense for a farmer to let food rot in the fields when there's a city full of potential customers an hour away? If you live under a hot sun, wouldn't you like to benefit from sharing your solar resource with your neighbor in the shade?

Approximately 10 states, including New York, California, Massachusetts, Michigan, Colorado, Washington and Utah either have community solar policies or are considering them.

In California, a new bill to promote electric vehicles includes a provision to pilot car-sharing programs in low-income neighborhoods. NRDC's Urban Solutions team is exploring how shared mobility can help cut global warming pollution, save money and reduce traffic congestion,  starting with some pilot programs in the Los Angeles.

Farmers in California who donate excess produce to food banks get a 10 percent tax credit, helping ensure that food is shared with people who need it instead of rotting in the fields.

As technology makes it easier for all of us to connect, and government policies adapt to encourage new economic models, the sharing economy just might help save the planet.

This post is part of the NRDC Wasteland series, featuring people, towns, businesses and industries that are finding innovative ways to cut waste, boost efficiency and save money, time and valuable resources. Follow all of the Expert Voices issues and debates — and become part of the discussion — on Facebook, Twitter and Google+. The views expressed are those of the author and do not necessarily reflect the views of the publisher.  This version of the article was originally published onLive Science.