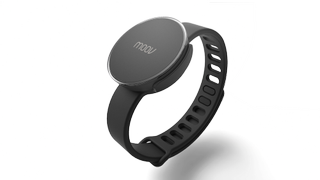 The Moov fitness tracker aims to be more of a fitness friend. Dubbed the "personal artificial intelligence coach" by its creators, Moov can help couch potatoes get into the swing of working out, or challenge fitness fanatics to take workouts to the next level. The device tracks some of the same data as most fitness trackers — steps taken, calories burned and the amount of time spent working out — but it also provides spoken instructions on how to improve or sustain certain movements while exercising.

At $79.95, this device is more affordable than most trackers that feature a coaching component, such as the Nike+ Sportwatch GPS, which retails for $199.99. However, Nike's Sportwatch has a GPS feature, so it can track the total distance you cover during a workout, and it also displays the time of day. But unlike Nike's product, Moov isn't just for runners — boxers and swimmers can also use this tracker during their workouts (the device is water-resistant enough to take in the pool).

I tested Moov for a week to see if it could get me back into the swing of my exercise routine.

Moov is a great fitness tracker and virtual coach for anyone who needs a little motivation to improve fitness performance (or just get up off the couch). With sleek hardware and software, this budget-friendly wearable allows runners, boxers and swimmers of every fitness level to experience one-on-one coaching on their own schedules.

A fairly new product, Moov still has a few kinks to work out before it will be as useful as other wearables that track sleep patterns and heart rate in addition to workouts. This device could also be improved by letting users control how much they want to be coached and by making it easier to utilize the GPS feature on a smartphone during a workout to track distance or pace.

Moov looks a bit like a wristwatch, and can be worn around the wrist or ankle. The tracker has no screen, so people who (like me) want a sleek, minimalist design while working out may prefer the Moov over some trackers with much bulkier designs. Since the Moov has no screen or buttons, you can focus completely on your workout with no distractions. However, for those who want to see their stats with a glance at their wrists, without having to lug out their smartphones, the Moov might not be optimal.

I used Moov for running and walking, and found that once I'd slipped the silicon strap around my ankle, I forgot the lightweight device was even there. Moov comes with two adjustable bands, one for the ankle (for running and walking) and one for the wrist (for boxing and swimming). The band was easy to strap on, and was notched to fit around limbs of all shapes and sizes.

To connect the tracker to your phone or tablet, you press down on Moov's circular face until a thin band around the outside of the circle lights up. The device itself comes in black or white, and in the companion app, you can choose what color light appears on the tracker.

Getting started with Moov is easy. First, you need to download the appropriate app for the activity you want to track. Right now, Moov has three available apps — Run & Walk, Cardio Boxing, and Swimming. An app for cycling and one that tracks body weight are due out soon, according to the company. Moov apps were originally only available for iOS devices, but recently also made their way onto the Android platform.

The app lets you connect your Moov to your smartphone or tablet via Bluetooth, which was a seamless process. If you want the app to track your elevation and pace while you run, you need to turn on the GPS tracking (or location services) on your mobile device. This wasn't totally clear the first time I used the tracker, so I didn't get any feedback on my pace during that first workout, which I later lamented.

The streamlined design of the Moov wearable carries over to the app, which is simple to navigate, even while working out. I used Moov during my afternoon walks or runs, plugging earbuds into my iPhone so I could hear the tracker's coaching advice.

The "walk" workout feature of the Run & Walk app is set up to record three 2-minute intervals with 30-second breaks between them. Each workout also allots time for a warm-up walk at a brisk pace. Throughout these intervals, a coaching voice told me whether I was keeping up with the pace I had set for myself, and offered advice on how to move more quickly. When the three intervals completed, I could choose to keep going or switch to a different app feature, like running or sprinting.

My only complaint while using this tracker was that there didn't seem to be a way to pause my workout. This was a problem since I was pushing a jogging stroller, loaded with a needy 3-year-old. It would have been nice to put my coach on pause for a few seconds without ending the workout altogether and starting from scratch.

Moov is marketed as an artificial intelligence coach, not just a fitness tracker, and I found that the wearable lived up to that claim. In addition to providing real-time tracking of cadence (steps per minute), impact (heaviness of steps) and range of motion (length of stride), the app also told me how to improve these metrics during my workout. For example, when I needed to increase my cadence to meet my goal, my coach told me so, providing tips on how I could move more quickly. I was surprised at how effective this approach was at getting me to improve my performance.

Other advice, like "Keep your spine straight," "Avoid swinging your hips" and "Look straight ahead with your chin up" got me going faster while also improving my form. There were even a few creative pieces of advice that inspired me to kick it into high gear (e.g., "Imagine you're walking over hot coals"). And instead of noting that my impact was too light, for example, my coach told me to "push harder off the ground."

I could have looked at my stats during each workout, but I like to just be in the moment, so I waited until afterward to see how I did. The app gives you a full activity report after each workout session, which provides data on things like your average range of motion, or cadence, and shows how your performance changed throughout the course of the workout. Descriptions for what these different metrics mean is conveniently located right in the app, so it all made sense to me instantly.

The app also has an icon that lets you know if your mobile device is connected, and whether your battery is fully charged. I found I needed to recharge only once during the week I used the Moov.

The Moov doesn't have a monitor that lets you know when you've reached your target heart rate, which would come in really handy. On its website, the device's creators say they'll soon be coming out with what they call a "third-party heart rate monitor integration," so perhaps in the future you'll be able to attach a heart rate monitor to the Moov wrist or ankle band.

For people who want to track the number of calories they are consuming, or how many hours they sleep, the Moov may not be the best fitness tracker, because it does not track those data.

The Moov is the only fitness tracker I've tested that tracks advanced swimming metrics in addition to metrics from other sports. It records laps completed, calories burned, distance swum, total time in the pool, average stroke rate and average distance per stroke. All of this information is laid out in an easy-to-read format in the Moov Swim app, and is accompanied by useful tips on how to improve swimming technique. There's also a "lap breakdown" chart in the app that lets you compare every lap you swam to a 200-meter Olympic gold-medal swim. I didn't really find this chart to be very useful or practical, but I appreciate that Moov tries to give you some kind of standard for comparing your stats.

However, you can't see the information that Moov tracks as you swim until after you climb out of the pool, as the device doesn't have a display screen. You can only see how many laps you've swum, or how many minutes you've been in the pool, by looking at your phone. You also have to go into the app before your swim to start recording your workout. That means you need to bring your phone to the gym with you if you want to use Moov. Once you press record in the app, you can leave your phone in your car or locker. Moov can store up to 90 minutes of data and won't start recording your swim until you actually get in the pool.

I had a blast using Moov and found that it really got me to jump back into a regular exercise routine with gusto. As a runner, I'm used to periodically getting advice from a coach, and I found that Moov offered me similar advice to that of my real-life coach: Remember to breathe regularly, keep your pace steady, don't forget to cool down.

Of course, sometimes I wasn't in the mood to be coached. But when I took my earbuds out altogether, I lost track of what interval I was on and whether or not I was on target to meet my goals. It would be nice if I could control how much the coaching feature talked. Surely, one of the advantages of having a computer for a coach must be that you can put it on mute.