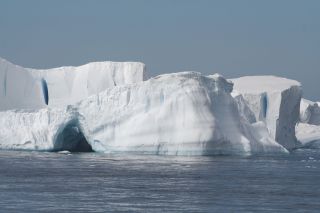 Ocean waters around Antarctica have warmed steadily for the past 40 years, according to a new study.

Some shallow areas have also heated more quickly than others, and waters around Antarctica are growing less salty in some regions, researchers reported today (Dec. 4) in the journal Science. The changes have spurred dramatic melting of ice shelves and could be a factor in Antarctica's record-breaking seasonal sea ice growth, the scientists said.

The study is the first comprehensive survey of temperature and salinity records for the Southern Ocean, said lead study author Sunke Schmidtko, an oceanographer at GEOMAR Helmholtz Centre for Ocean Research in Kiel, Germany. The research confirms earlier findings of rapid warming in deep offshore currents in the Southern Ocean near Antarctica. However, Schmidtko and his co-authors also report significant heating of ocean water on the continental shelf, the shallow underwater region that underlies Antarctica's floating ice shelves.

Warm ocean water that melts ice shelves from below accounts for most of the ice loss in Antarctica, recent studies have found. "A half-degree rise in water temperature close to a big ice shelf can melt the ice significantly faster than raising the air temperature," Schmidtko said. "It's a tremendous amount of heat available to melt the ice." [Album: Stunning Photos of Antarctic Ice]

West Antarctica, where glaciers are hemorrhaging ice fastest, was the warmest region of Antarctica's shallow ocean over the past 40 years, the researchers discovered. Temperatures near the continental shelf also rose more quickly here than elsewhere in Antarctica.

Even 40 years ago, West Antarctica's seawater was warmer than in other regions of the frigid ocean. No one knows when the warming started, Schmidtko said. But elsewhere in Antarctica, shallow ocean temperatures remained cold, and in the shallow western Weddell Sea, temperatures even cooled slightly.

Stan Jacobs, an oceanographer who wasn't involved with the new study, cautioned against drawing strong conclusions about temperature trends because there is natural variability among different continental shelf regions.

"The records are short and you have to be a little careful of trends over a short period of time," said Jacobs, a research scientist at Columbia University's Lamont-Doherty Earth Observatory. "Variability is a big issue."

Schmidtko attributes the regional differences to a wind-driven coastal current that circles the continent like a moat and protects it from encroaching warm water. Many scientists think changes in wind patterns since the 1950s have weakened the coastal current, allowing warm water to penetrate onto the shallow continental shelf in West Antarctica. "That's why the warm areas get warmer and the cold areas stay cold," Schmidtko said. "Any temperature rise will immediately increase the temperature on the [West Antarctic] shelf, but warm water can't breach the coastal current [in East Antarctica]."

The underwater boundary between cold and warm water has risen by nearly 100 feet (30 m) per decade in the past 40 years, the study reported. This shallowing means warm water can more easily reach the continental shelf.

Melting from below accounted for more than half of all ice loss in Antarctica in the past 20 years. And a recent study found the melt rate of glaciers in the Amundsen Sea has tripled in the last decade.

Though Antarctica's land ice is melting, its seasonal sea ice is growing slightly larger each winter. Scientists think this freeze-up is related to more freshwater at the ocean surface. Schmidtko and his colleagues documented less salty water in several spots, with the most freshening in the Ross Sea, where sea ice often hits a maximum. However, "we only show there is more freshwater on the shelf. We can't link it to sea ice yet," Schmidtko cautioned.