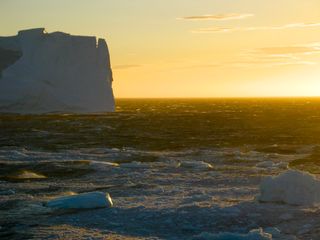 A shift from briny to fresh in Antarctica's ocean waters in recent decades could explain the shutdown of the Southern Ocean's coldest, deepest currents, a new study finds.

The cold currents, called the Antarctic Bottom Water, are chilly, salty rivers that flow from the underwater edge of the Antarctic continent north toward the equator, keeping to the bottom of the seafloor. The currents carry oxygen, carbon and nutrients down to the deepest parts of the ocean. Previous studies have found this deep, dense water is disappearing, though researchers aren't sure if the shrinkage is part of a long-term trend linked to global warming, or a natural cycle.

The new study suggests that Antarctica's changing climate is to blame for the shrinking Antarctica Bottom Water. In the past 60 years, the ocean surface offshore Antarctica became less salty as a result of melting glaciers and more precipitation (both rain and snow), researchers reported Sunday (March 2) in the journal Nature Climate Change. This growing freshwater layer is the key link in a chain that prevents the cold-water currents from forming, the study finds.

"Deep ocean waters only mix directly to the surface in a few small regions of the global ocean, so this has effectively shut one of the main conduits for deep-ocean heat to escape," said Casimir de Lavergne, an oceanographer at McGill University in Montreal.

The linchpins linking freshwater and cold currents are polynyas, or natural holes within sea ice. These persistent regions of open water form when upwellings of warm ocean water keep water temperatures above freezing, or when winds drive sea ice away from the coast.

Polynyas are one of the main sources of Antarctica Bottom Water. Polynyas act like natural refrigerators, letting frigid temperatures and cold winds chill seawater and send it sinking down to the ocean bottom. As the cold water sinks, warmer ocean water comes up to take its place, maintaining the polynya's open water. [Album: Stunning Photos of Antarctic Ice]

But as Antarctica's ocean surface water has freshened, fewer polynyas have appeared, the researchers found. That's because the fresher water is less dense. Even if the water is very cold, it doesn't sink as readily as saltier water, de Lavergne explained. The freshwater acts like a lid, shutting down the ocean circulation that sends cold water to the seafloor, and brings up warm water into the polynyas.

"What we suggest is, the change in salinity of the surface water makes them so light that even very strong cooling is not sufficient to make them dense enough to sink," de Lavergne told Live Science. "Mixing them gets harder and harder."

In addition to warming and shrinking the Antarctic Bottom Water currents, the reduction in polynyas could be trapping extra heat in the Southern Ocean, de Lavergne said.

"If the warm waters aren't able to release their heat to the atmosphere, then the heat is waiting in the deep ocean instead," he said. "This could have slowed the rate of warming in the Southern Hemisphere."

De Lavergne cautioned that the heat-storage effect is localized and not related to the so-called global warming "hiatus" — the recent slowdown in the rise of global surface temperatures.

"Our study is still a hypothesis," he added. "We say that climate change is preventing convection from happening, but we do not know how frequent it was in the past, so that's a big avenue for future research."