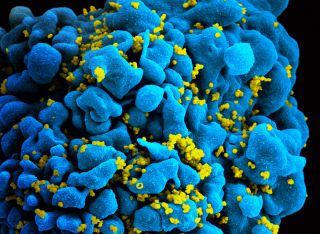 Putting HIV under the microscope.
(Image: © NIAID, CC BY)

A 22-year-old woman in Brazil who tested positive for HIV likely contracted the virus through the use of manicure instruments that she had shared with an HIV-infected cousin, according to a new report of her case.

The woman was diagnosed with HIV in 2013 when she donated blood. Doctors tried to rule out all other possible modes of transmission, said Luis Fernando de Macedo Brigido, of the Adolpho Lutz Institute in São Paulo, Brazil, who was one of the researchers who reported the case.

The woman in the report told her doctors she had never had sex, and her doctors confirmed this with a gynecological examination, according to the case report.

The woman also said she had never had a blood transfusion, surgery, piercing or tattooing, which could have been potential vehicles for transmission, the researchers wrote in their report published Oct. 29 in the journal AIDS Research and Human Retroviruses.

About 10 years before her diagnosis, the woman had shared manicure instruments with her HIV-infected cousin. The cousin had been diagnosed with HIV 17 years before, but at the time when the women shared the equipment, the woman in the new case did not know that her cousin had the virus. [The 9 Deadliest Viruses on Earth]

The cousin and the case patient carry variants of the virus that are so similar they suggest a common origin, Brigido said.

"The manicure events are the only identified link between the patient and her cousin," Brigido said. This is the first case of HIV transmission through the use of manicure utensils reported in the medical literature that the researchers know of, he said.

The Centers for Disease Control and Prevention (CDC) does not currently list manicure tools as one of the potential vehicles for virus transmission. But does this case mean that people should worry about contracting HIV through a manicure?

"This source of transmission is probably rare, as it is for tattooing," and other potential transmission through the use of infected objects that pierce the skin, Brigido said.

People can contract other diseases — including hepatitis B, hepatitis C and other pathogens — if manicure instruments are not sterilized between users, he added.

Dr. Uriel Felsen, the medical director of HIV counseling and testing at the HIV/AIDS Center at Montefiore Medical Center in New York, who was not involved in the woman's case, said, "This is the first time that I have seen something as close to a confirmed case of HIV being transmitted through shared manicure utensils."

The new case "really strengthens the argument" that people should get this testing done, he told Live Science.

"Even though I think it is unlikely that many people have been infected through those unlikely modes of transmission, the fact of the matter is that people misperceive their risk all of the time, and there is a large proportion of people who have HIV and don't know it because they didn't realize that they were actually at risk at some point," he said.

Moreover, the case report said that the infected cousin was not taking any HIV medications at the time when the transmission would have occurred. This means "she would have had a high HIV viral load at the time that they would have shared this equipment," Felsen said.

Although it cannot be determined for sure, Felsen said he thinks that if the cousin had been taking HIV medications when the women were sharing the manicure equipment, it may have prevented the transmission of the virus to the other woman, he said.

"These days we are talking a lot about treatment of HIV as a form of prevention, so if all of the people that have HIV are actually on effective treatment, it really would decrease the risk of ongoing transmission of the virus," he said.