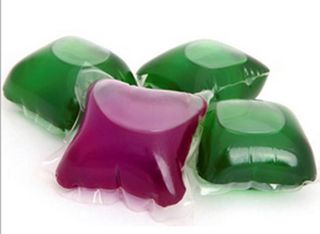 Thousands of young children in the United States have ingested laundry detergent pods in recent years, and now researchers are calling for safer packing of the colorful capsules, according to a new study.

From 2012 through 2013, U.S. poison control centers received more than 17,000 calls related to laundry pods with children younger than age 6, the new study found.

About 80 percent of the calls (more than 13,000 cases) were for children who had ingested the pods. In other cases, some children had burst open the pods and exposed their eyes to the chemicals, while others inhaled detergent from the pods.

Most calls (two-thirds) involved children who were 1 or 2 years old, the study found. These are the ages at which children are becoming mobile and commonly place objects in their mouths, according to researchers from Nationwide Children’s Hospital in Columbus, Ohio.

In about half of the cases (53.5 percent), the child could be cared for at home and did not require a trip to the doctor. Among children who visited a health care facility, most were treated and released, but about 4 percent were admitted to the hospital. [9 Weird Ways Kids Can Get Hurt]

The most common effects of pod exposure were vomiting, coughing/choking, eye irritation or pain and drowsiness. A small number of children experienced coma, seizures, breathing problems or stomach burns. One death, of a 7-month-old child, was confirmed to be due to laundry pod exposure.

The colorful, candylike designs of the pods may be appealing to children, the researchers said.

In the spring of 2013, Procter & Gamble, which makes Tide Pods, began packing the pods in opaque containers (as opposed to see-through containers), and later in the year, the company introduced latches to the containers. After these changes, there was a 25 percent drop in calls to poison control centers for laundry pod exposure, the study found. (Other factors may have contributed to the decline as well, such as increased public awareness of the hazards the products may pose to children, as well as the reported death of a toddler in August 2013, the researchers said.)

Despite the reduction in calls to poison control centers in 2013, more efforts are needed to prevent exposure of children to the pods, including standards to ensure that all manufacturers adopt safer packaging, the researchers said.

"Laundry detergent pods are new products in the U.S. marketplace that pose a serious poisoning risk to young children," the researchers wrote in their article published today (Nov. 10) in the journal Pediatrics. "This nationwide study underscores the need for increased efforts to prevent exposure of young children to these products, which may include improvements in product packaging and labeling, development of a voluntary product safety standard and public education."