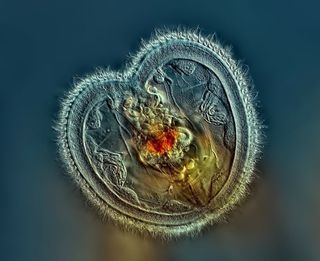 In a photo contest that honors all things small, it's tough to beat a shot of a rotifer: A view into the mouth of one of the tiniest animals on the planet won the top prize in this year's Nikon Small World competition.

Rotifers rank among tardigrades as the smallest creatures in the animal kingdom. The winning photo, captured by Rogelio Moreno, a programmer and self-taught microscopist from Panama, shows the open mouth of a rotifer surrounded by a heart-shaped corona, or a crown of cilia that sweep water into its maw.

Capturing the photo was a feat of extreme patience. Moreno watched the rotifer for hours, waiting for the right opportunity to snap a shot of the constantly moving creature at the moment it opened its mouth, according to Nikon. [See the Top 10 Images from the 2014 Nikon Small World Contest]

"When you see that movement, you fall in love," Moreno said in a statement. "I thought, 'Wow, that is amazing. I can't believe what I'm seeing. This is something very, very beautiful.' I hope now it can inspire others as much as it has inspired me to learn about science, to look closely and notice something truly amazing."

Other winners who earned a spot in the top 10 looked outside the animal kingdom for inspiration. Second prize went to University of Pisa graduate student Alessandro Da Mommio, whose close-up of a calcite crystal lattice is so geometric it's hard to believe the pattern was created by nature. The seventh-prize photo shows the circuitry in a DVD reader, which, magnified 100 times, almost looks like an architect's floor plan for an office.

The surprised-looking eyes of a jumping spider — a species famous for its good vision — also caught the judges' attention, earning Noah Fram-Schwartz, of Greenwich, Connecticut, third prize. Fourth place went to another creepy-crawly shot: a view of a caterpillar's stubby proleg (an appendage that's not truly a leg) with a ring of gripping hooks.

More than 1,200 entries were submitted to this year's competition from about 80 countries, according to Nikon. The top photos were chosen based on both their artistic quality and scientific technique, according to Nikon, which has been running the contest for four decades.

Last year's winning photo was an up-close portrait of a corkscrew-shaped plankton. The year before, a novel view of the blood-brain barrier in a live zebrafish embryo was awarded top honors. The winning image in 2011 showed a tiny green lacewing larva.